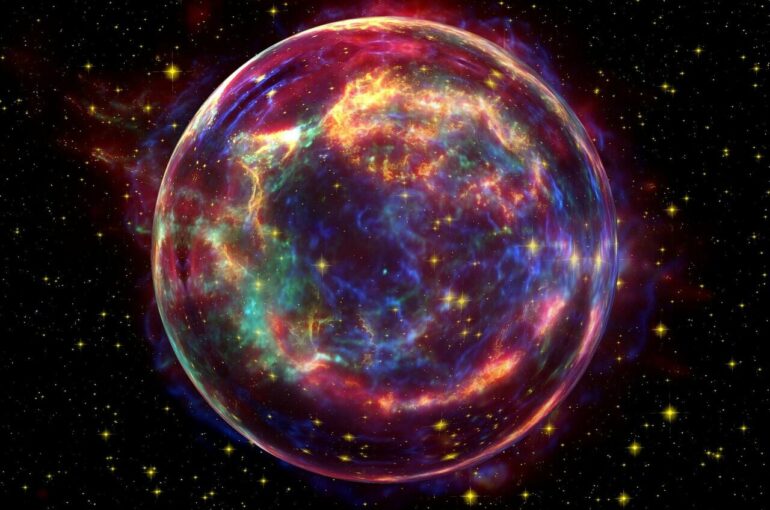 Scientists from the RIKEN Cluster for Pioneering Research have used computer modeling to show how a hypothesized type of supernova would evolve on the scale of thousands of years, giving researchers a way to look for examples of supernovae of this model, known as “D6.”

Supernovae are important for cosmology, as one type, Ia, is used as a “standard candle” that allows distance to be measured, and in fact they were used for the measurements that showed, surprisingly to initial observers, that the expansion of the universe is accelerating. It is generally accepted that type Ia supernovae arise from the explosion of degenerate stars known as white dwarfs—stars that have burned through their hydrogen and shrunk into compact objects—but the mechanism that causes the explosions is not well understood.

Recently, the discovery of white dwarfs that are moving extremely rapidly has given added credibility to one proposed mechanism for the origin of these supernovae, D6. In this scenario, one of two white dwarfs in a binary system undergoes what is known as a “double detonation,” where a surface layer of helium first explodes, then igniting a larger explosion in the carbon-oxygen core of the star. This leads to the obliteration of the star, and the companion, suddenly freed from the gravitational attraction of the exploding star, is flung out at enormous velocity.

However, very little is known about what shape the remnant of such an event would look like long after the initial explosion. To explore this, the team decided to simulate the long-term evolution, in the form of a supernova remnant, for thousands of years after the explosion. In fact, they were able to observe some features in the progenitor system that would be specific to this scenario, thus offering a way to probe supernova physics, including a “shadow” or dark patch surrounded by a bright ring. They also concluded that the remnants of type Ia explosions are not necessarily symmetric, as is commonly believed.

According to Gilles Ferrand, the first author of the study, “The D6 supernova explosion has a specific shape. We were not confident that it would be visible in the remnant long after the initial event, but actually we found that there is a specific signature that we can still see thousands of years after the explosion.”

Shigehiro Nagataki, the leader of the Astrophysical Big Bang Laboratory at RIKEN, says, “This is a very important finding, because it could have an impact on the use of Ia supernovae as cosmic yardsticks. They were once believed to originate from a single phenomenon, but if they are diverse, then it might require a reevaluation of how we use them.”

Ferrand continues, “Moving forward, we plan to learn how to more precisely compute the X-ray emission, taking into account the composition and state of the shocked plasma, in order to make direct comparisons with observations. We hope that our paper will give new ideas to observers, of what to look for in supernova remnants.”

The research, done in conjunction with an international group including researchers from the University of Manitoba, was published in The Astrophysical Journal.