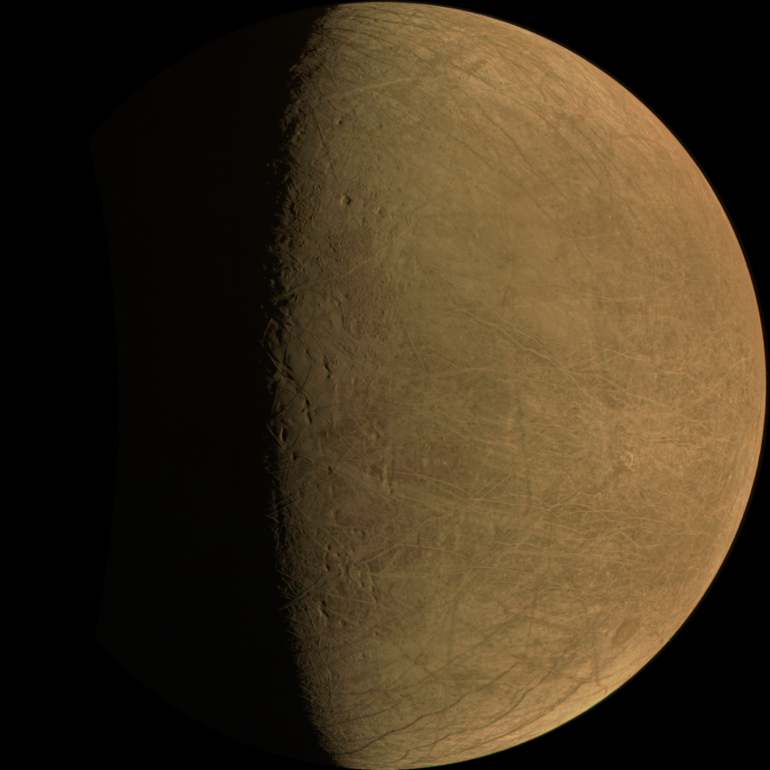 Observations from the spacecraft’s pass of the moon provided the first close-up in over two decades of this ocean world, resulting in remarkable imagery and unique science.

The highest-resolution photo NASA’s Juno mission has ever taken of a specific portion of Jupiter’s moon Europa reveals a detailed view of a puzzling region of the moon’s heavily fractured icy crust.

The image covers about 93 miles (150 kilometers) by 125 miles (200 kilometers) of Europa’s surface, revealing a region crisscrossed with a network of fine grooves and double ridges (pairs of long parallel lines indicating elevated features in the ice). Near the upper right of the image, as well as just to the right and below center, are dark stains possibly linked to something from below erupting onto the surface. Below center and to the right is a surface feature that recalls a musical quarter note, measuring 42 miles (67 kilometers) north-south by 23 miles (37 kilometers) east-west. The white dots in the image are signatures of penetrating high-energy particles from the severe radiation environment around the moon.

Juno’s Stellar Reference Unit (SRU)—a star camera used to orient the spacecraft—obtained the black-and-white image during the spacecraft’s flyby of Europa on Sept. 29, 2022, at a distance of about 256 miles (412 kilometers). With a resolution that ranges from 840 to 1,115 feet (256 to 340 meters) per pixel, the image was captured as Juno raced past at about 15 miles per second (24 kilometers per second) over a part of the surface that was in nighttime, dimly lit by “Jupiter shine”—sunlight reflecting off Jupiter’s cloud tops.

Designed for low-light conditions, the SRU has also proven itself a valuable science tool, discovering shallow lightning in Jupiter’s atmosphere, imaging Jupiter’s enigmatic ring system, and now providing a glimpse of some of Europa’s most fascinating geologic formations.

“This image is unlocking an incredible level of detail in a region not previously imaged at such resolution and under such revealing illumination conditions,” said Heidi Becker, the lead co-investigator for the SRU. “The team’s use of a star-tracker camera for science is a great example of Juno’s groundbreaking capabilities. These features are so intriguing. Understanding how they formed—and how they connect to Europa’s history—informs us about internal and external processes shaping the icy crust.”

It won’t just be Juno’s SRU scientists who will be busy analyzing data in the coming weeks. During Juno’s 45th orbit around Jupiter, all of the spacecraft’s science instruments were collecting data both during the Europa flyby and then again as Juno flew over Jupiter’s poles a short 7 ½ hours later.

“Juno started out completely focused on Jupiter. The team is really excited that during our extended mission, we expanded our investigation to include three of the four Galilean satellites and Jupiter’s rings,” said Juno Principal Investigator Scott Bolton of the Southwest Research Institute in San Antonio. “With this flyby of Europa, Juno has now seen close-ups of two of the most interesting moons of Jupiter, and their ice shell crusts look very different from each other. In 2023, Io, the most volcanic body in the solar system, will join the club.” Juno sailed by Jupiter’s moon Ganymede—the solar system’s largest moon—in June 2021.

Europa is the solar system’s sixth-largest moon with about 90% the equatorial diameter of Earth’s moon. Scientists are confident a salty ocean lies below a miles-thick ice shell, sparking questions about the potential habitability of the ocean. In the early 2030s, the NASA’s Europa Clipper spacecraft will arrive and strive to answer these questions about Europa’s habitability. The data from the Juno flyby provides a preview of what that mission will reveal.