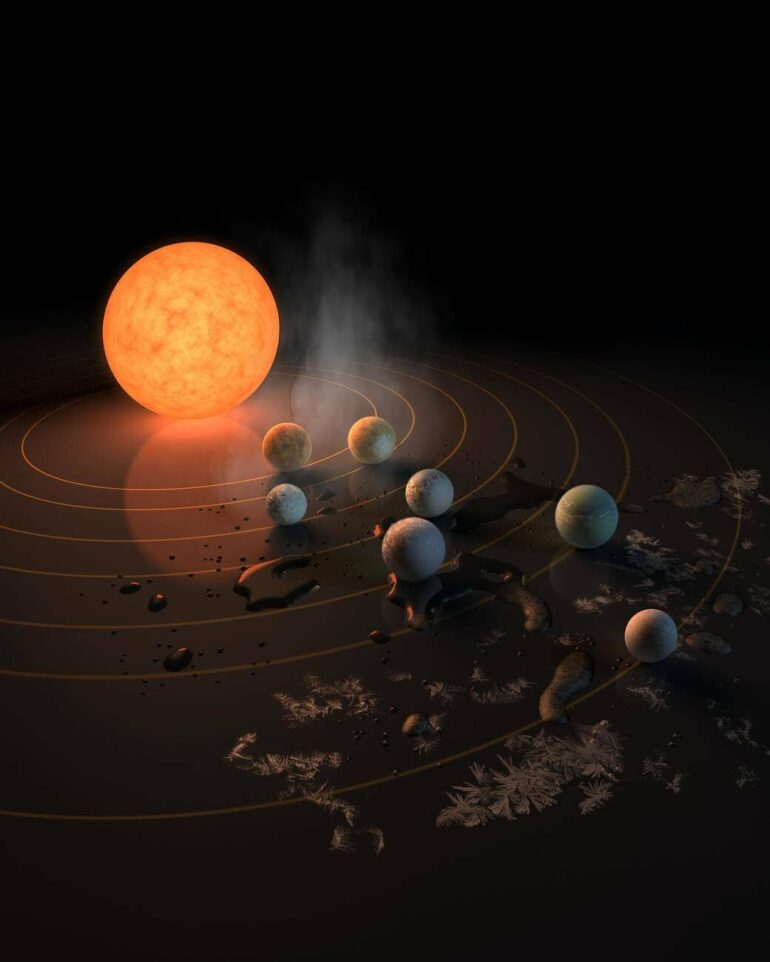 Scientists at UC Riverside are suggesting something is missing from the typical roster of chemicals that astrobiologists use to search for life on planets around other stars—laughing gas.

Chemical compounds in a planet’s atmosphere that could indicate life, called biosignatures, typically include gases found in abundance in Earth’s atmosphere today.

“There’s been a lot of thought put into oxygen and methane as biosignatures. Fewer researchers have seriously considered nitrous oxide, but we think that may be a mistake,” said Eddie Schwieterman, an astrobiologist in UCR’s Department of Earth and Planetary Sciences.

This conclusion, and the modeling work that led to it, are detailed in an article published today in The Astrophysical Journal.

To reach it, Schwieterman led a team of researchers that determined how much nitrous oxide living things on a planet similar to Earth could possibly produce. They then made models simulating that planet around different kinds of stars and determined amounts of N2O that could be detected by an observatory like the James Webb Space Telescope.

“In a star system like TRAPPIST-1, the nearest and best system to observe the atmospheres of rocky planets, you could potentially detect nitrous oxide at levels comparable to CO2 or methane,” Schwieterman said.

There are multiple ways that living things can create nitrous oxide, or N2O. Microorganisms are constantly transforming other nitrogen compounds into N2O, a metabolic process that can yield useful cellular energy.

“Life generates nitrogen waste products that are converted by some microorganisms into nitrates. In a fish tank, these nitrates build up, which is why you have to change the water,” Schwieterman said.

“However, under the right conditions in the ocean, certain bacteria can convert those nitrates into N2O,” Schwieterman explained. “The gas then leaks into the atmosphere.”

Under certain circumstances, N2O could be detected in an atmosphere and still not indicate life. Schwieterman’s team accounted for this in their modeling. A small amount of nitrous oxide is created by lightning, for example. But alongside N2O, lightning also creates nitrogen dioxide, which would offer astrobiologists a clue that non-living weather or geological processes created the gas.

Others who have considered N2O as a biosignature gas often conclude it would be difficult to detect from so far away. Schwieterman explained that this conclusion is based on N2O concentrations in Earth’s atmosphere today. Because there isn’t a lot of it on this planet, which is teeming with life, some believe it would also be hard to detect elsewhere.

“This conclusion doesn’t account for periods in Earth’s history where ocean conditions would have allowed for much greater biological release of N2O. Conditions in those periods might mirror where an exoplanet is today,” Schwieterman said.

Schwieterman added that common stars like K and M dwarfs produce a light spectrum that is less effective at breaking up the N2O molecule than our sun is. These two effects combined could greatly increase the predicted amount of this biosignature gas on an inhabited world.

The research team believes now is the time for astrobiologists to consider alternative biosignature gases like N2O because the James Webb telescope may soon be sending information about the atmospheres of rocky, Earth-like planets in the TRAPPIST-1 system.

“We wanted to put this idea forward to show it’s not out of the question we’d find this biosignature gas, if we look for it,” Schwieterman said.