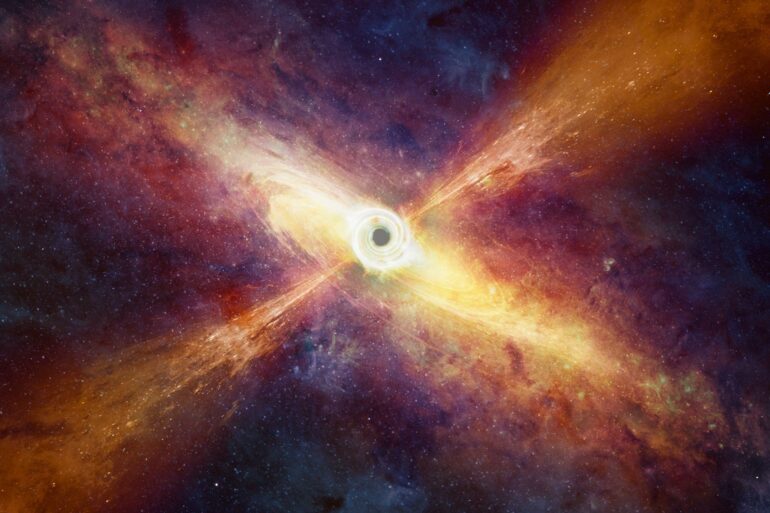 An international team of astronomers led by Dutch scientists has discovered that even a weak jet stream from a low-active black hole can be a kind of leaf blower to clean parts of a galaxy. The observed black hole removes about 75% of the cold gas in the central regions of the galaxy in a few million years. This probably stops the formation of stars. The researchers publish their findings on Thursday in the journal Nature Astronomy.

Until now, astronomers have always assumed that only black holes with strong radiation stop star formation from within the galaxy. This is because these black holes blow away gas, which is the building block for stars. The question, however, is whether galaxies without strongly radiating black holes are also inhibited in their growth.

Now, astronomers have discovered a less powerful black hole that also seems to be cleaning up its surroundings. This low-power black hole is found in the galaxy B2 0258+35 in the constellation of Perseus. It does not emit strong radiation but has radio plasma jets that are bright, as opposed to black holes that emit visible light, ultraviolet or X-rays.

The gas at B2 0258+35 is blown away steadily at a speed of about 500 kilometers per second. It is roughly five to ten solar masses per year and takes a few million years. The gas is not moving fast enough to escape from the reach of the galaxy. It eventually falls back and ends up at the edges of the galaxy. From there, it cannot properly form new stars.

“That low-power radio jets have also been found to clean a galaxy is extraordinary,” says principal investigator Suma Murthy (working at ASTRON and at the Kapteyn Institute of the University of Groningen during the research). “A large part of the radio emitters are relatively quiet. It was thought that they did not play an important role in growth inhibition. Our results show that these relatively weak radio-emitters can indeed inhibit growth. From now on, we will have to take this into account in models for the evolution of galaxies.”

The researchers made their observations in October and November 2020 with the NOEMA telescopes. NOEMA stands for Northern Extended Millimetre Array. It is a collection of radio dishes in the French Alps at an altitude of about 2500 meters. The observations by Murthy and her colleagues had previously been predicted by computer simulations.

Murthy defended her Ph.D. thesis at the University of Groningen on 8 February. She now works as a postdoc at JIVE, the European institute in Dwingeloo that, among other things, coordinates the cooperation of radio telescopes all over the world.