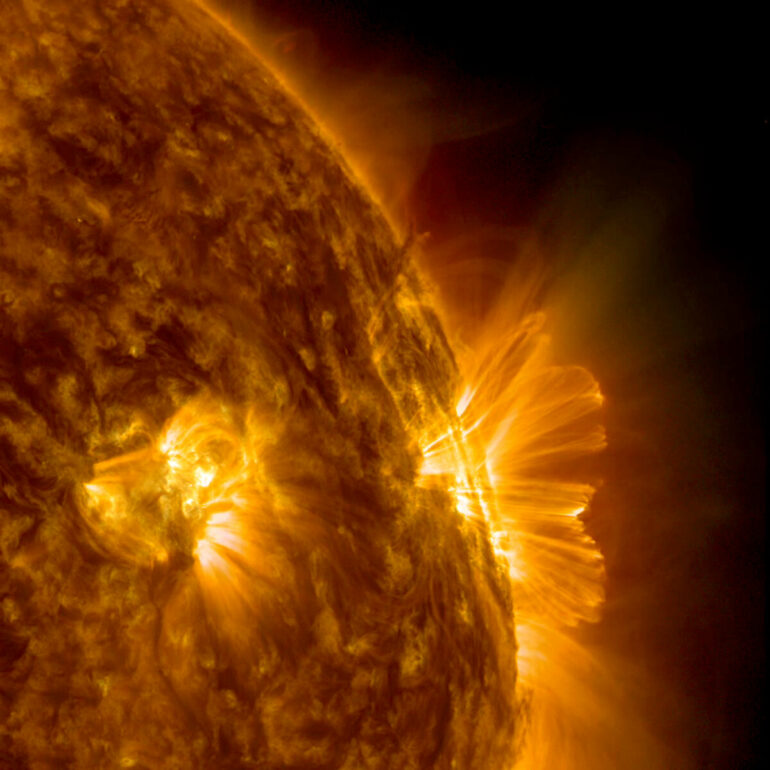 Why the sun’s corona reaches temperatures of several million degrees Celsius is one of the great mysteries of solar physics. A “hot” trail to explain this effect leads to a region of the solar atmosphere just below the corona, where sound waves and certain plasma waves travel at the same speed. In an experiment using the molten alkali metal rubidium and pulsed high magnetic fields, a team from the Helmholtz-Zentrum Dresden-Rossendorf (HZDR), a German national lab, has developed a laboratory model, and for the first time experimentally confirmed the theoretically predicted behavior of these plasma waves—so-called Alfvén waves—as the researchers report in the journal Physical Review Letters.

At 15 million degrees Celsius, the center of our sun is unimaginably hot. At its surface, it emits its light at a comparatively moderate 6000 degrees Celsius. “It is all the more astonishing that temperatures of several million degrees suddenly prevail again in the overlying sun’s corona,” says Dr. Frank Stefani. His team conducts research at the HZDR Institute of Fluid Dynamics on the physics of celestial bodies—including our central star. For Stefani, the phenomenon of corona heating remains one of the great mysteries of solar physics, one that keeps running through his mind in the form of a very simple question: “Why is the pot warmer than the stove?”

That magnetic fields play a dominant role in heating the sun’s corona is now widely accepted in solar physics. However, it remains controversial whether this effect is mainly due to a sudden change in magnetic field structures in the solar plasma or to the dampening of different types of waves. The new work of the Dresden team focuses on the so-called Alfvén waves that occur below the corona in the hot plasma of the solar atmosphere, which is permeated by magnetic fields. The magnetic fields acting on the ionized particles of the plasma resemble a guitar string, whose playing triggers a wave motion. Just as the pitch of a strummed string increases with its tension, the frequency and propagation speed of the Alfvén wave increases with the strength of the magnetic field.

“Just below the sun’s corona lies the so-called magnetic canopy, a layer in which magnetic fields are aligned largely parallel to the solar surface. Here, sound and Alfvén waves have roughly the same speed and can therefore easily morph into each other. We wanted to get to exactly this magic point—where the shock-like transformation of the magnetic energy of the plasma into heat begins,” says Stefani, outlining his team’s goal.

Soon after their prediction in 1942, the Alfvén waves had been detected in first liquid-metal experiments and later studied in detail in elaborate plasma physics facilities. Only the conditions of the magnetic canopy, considered crucial for corona heating, remained inaccessible to experimenters until now. On the one hand, in large plasma experiments the Alfvén speed is typically much higher than the speed of sound. On the other hand, in all liquid-metal experiments to date, it has been significantly lower. The reason for this: The relatively low magnetic field strength of common superconducting coils with a constant field of about 20 tesla.

But what about pulsed magnetic fields, such as those that can be generated at the HZDR’s Dresden High Magnetic Field Laboratory (HLD) with maximum values of almost 100 tesla? This corresponds to about two million times the strength of the Earth’s magnetic field: Would these extremely high fields allow Alfvén waves to break through the sound barrier? By looking at the properties of liquid metals, researchers knew in advance that the alkali metal rubidium actually reaches this magic point already at 54 tesla.

But rubidium ignites spontaneously in air and reacts violently with water. The team therefore initially had doubts as to whether such a dangerous experiment was advisable at all. The doubts were quickly dispelled, recalls Dr. Thomas Herrmannsdörfer of the HLD: “Our energy supply system for operating the pulse magnets converts 50 megajoules in a fraction of a second—with that, we could theoretically get a commercial airliner to take off in a fraction of a second. When I explained to my colleagues that a thousandth of this amount of chemical energy of the liquid rubidium does not worry me very much, their facial expressions visibly brightened.”

Pulsed through the magnetic sound barrier

Nevertheless, it was still a rocky road to the successful experiment. Because of the pressures of up to fifty times the atmospheric air pressure generated in the pulsed magnetic field, the rubidium melt had to be enclosed in a sturdy stainless steel container, which an experienced chemist, brought out of retirement, was to fill. By injecting alternating current at the bottom of the container while simultaneously exposing it to the magnetic field, it was finally possible to generate Alfvén waves in the melt, whose upward motion was measured at the expected speed.

The novelty: While up to the magic field strength of 54 tesla all measurements were dominated by the frequency of the alternating current signal, exactly at this point a new signal with halved frequency appeared. This sudden period doubling was in perfect agreement with the theoretical predictions. The Alfvén waves of Stefani’s team had broken through the sound barrier for the first time. Although not all observed effects can yet be explained so easily, the work contributes an important detail to solving the puzzle of the sun’s corona heating. For the future, the researchers are planning detailed numerical analyses and further experiments.

Astronomers find evidence for a second supermoon beyond our solar system

Research on the heating mechanism of the sun’s corona is also being carried out elsewhere: The Parker Solar Probe and Solar Orbiter space probes are about to gain new insights at close range.