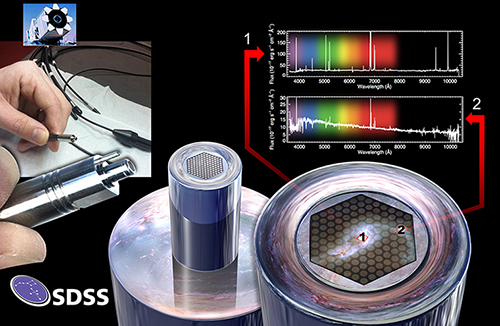 Just over a month ago, scientists from the Sloan Digital Sky Survey (SDSS) released the complete dataset of 10,000 galaxies observed by the Mapping Nearby Galaxies at Apache Point Observatory (MaNGA) project, making MaNGA the largest galaxy survey of its kind.

“Observing such a large sample with MaNGA allows us to see how the detailed internal properties of galaxies vary in systematic ways with other factors, like galaxy mass or where galaxies live in the universe,” Bundy said. “These patterns are the key to understanding the physical processes that shape galaxy evolution.”

MaNGA is a special kind of galaxy survey, using an innovative fiber-bundling technology to make detailed spectral maps of thousands of nearby galaxies. Spectra are graphs that show the amount of light given off by a galaxy at different wavelengths, much like a rainbow shows the amount of sunlight in various colors. Most previous galaxy surveys have either taken detailed images in one or a handful of colors, or measured just a single spectrum for an entire galaxy, but MaNGA works differently.

With fiber-optic cables bundled into tightly-packed hexagonal arrays, the team measured spectra at tens to hundreds of separate points in each galaxy, resulting in a “datacube” containing full spectroscopic information at each point. MaNGA was able to observe seventeen galaxies at once, while similar surveys could only observe one galaxy at a time. Six years of observing in this mode created the largest sample size of this kind ever obtained.

Researchers study each data cube to reveal its galaxy’s detailed chemical composition; find the ages, chemical makeup, and motions of the stars inside it; and map ionized interstellar gas. MaNGA has created over 30 different maps for each galaxy. These maps can be used for lots of different applications, for example, to estimate how many baby stars are being formed at every position in the galaxy, or to find the influence of the central supermassive black hole. MaNGA dramatically increases the number of galaxies with this detailed information, and a sister project, the MaNGA Stellar Library (MaStar), helped it along.

Galaxies are made of stars, so understanding them in detail requires a detailed library of spectra of stars. Alongside the complete release of MaNGA, SDSS scientists announced the completion of MaStar, which made use of otherwise unused time on the MaNGA instrument to observe over 24,000 stars, enabling the scientists to more accurately extract information from the MaNGA data.

The leader of the MaStar project, Renbin Yan of the Chinese University of Hong Kong, explained, “MaStar is a special kind of library that includes spectra for as many types of stars as possible. Using these data, we can figure out how many of each type of star add up to make each of the many spectra from a MaNGA galaxy and reconstruct the most accurate view ever of when and where stars formed in that galaxy’s cosmic history.”

For example, MaNGA data have been used to make movies showing how the location where baby stars form moves around through spiral arms and other features in galaxies. Identifying which spectra came from which internal structure turns out to be tricky for computers, but with the help of citizen scientists, the MaNGA team have been able to do this, providing in this release maps showing where the structures are. And the kinematics of galaxies can reveal previously unknown galaxy interactions.

All of this MaNGA data has been made publicly available, and the SDSS team have also created a specially designed tool dubbed “Marvin” to help with data access. Marvin allows anyone to have a quick look at the data of each galaxy in an easy-to-use web interface, and is also available as a powerful set of python modules which allow anyone familiar with coding to access and visualize this complex data. Brian Cherinka at the Space Telescope Science Institute, one of the lead developers of Marvin, explains, “Marvin was designed specifically to access the complex MaNGA data and help researchers to avoid some of the common pitfalls in data visualization and access.”

Using MaNGA data and an early version of Marvin, scientists have already been discovering many new things about galaxies, with over 500 papers already published using the data. For example, MaNGA team members discovered a new class of galaxy, dubbed a red geyser, in which outflows from the supermassive black hole, revealed in MaNGA maps of ionized gas, are preventing new stars from forming. And to scientists’ surprise, this happens even in the smallest galaxies.

Making MaNGA data publicly available and accessible will fuel science analyses for years to come and puts the full power of MaNGA data into the hands of anyone who wants to use it. “It’s important to us that the data is not just available, but also accessible, so that anyone with an interest in galaxies can use MaNGA data for their research, education, or just for fun, can explore the cubes, spectra, and maps to learn more about these galaxies,” said Anne-Marie Weijmans of the University of St. Andrews, who led the part of the SDSS team in charge of data releases. “You don’t need to be a galaxy expert to work with MaNGA data: we have many tutorials on our website to get you started.”

The instrumentation innovations developed for MaNGA will reverberate into the future. The next generation of SDSS (SDSS-V) is expanding on the novel fiber-packing methods developed for MaNGA to construct even larger fiber bundles for its Local Volume Mapper program. This survey will also study gas and newly-formed stars, but in an environment much closer to home—our own Milky Way and its nearby smaller neighbors. By combining these data with what MaNGA has learned from thousands of more distant galaxies, astronomers will gain a much deeper understanding of how gas and stars coexist and interact throughout a galaxy’s lifetime.