Mars as a base for asteroid exploration and mining 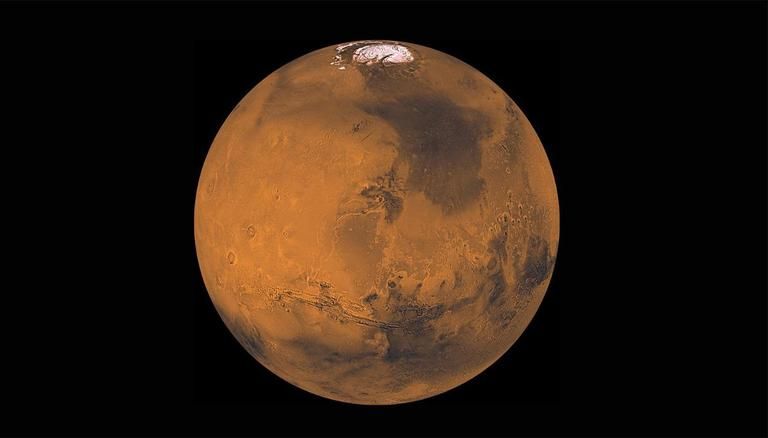 Mining the asteroids for resources like iron, precious metals, water, or other valuable species may someday become profitable. Mining will probably starting with near Earth objects (NEOs), asteroids whose paths cross the Earth’s orbital path. In the long-term, however, mining will want to access the Main Belt of asteroids that orbit between Mars and Jupiter.

Although NEOs are a lot closer to us, profitable mining entails balancing more than just the cost of traveling across a distance. The Main Belt asteroids contain about 10,000 times as much resources as NEOs. Moreover, any asteroid mining operation must take into account the expense of the rendezvous—slowing the spacecraft down once it arrives—as well as the cost of shipping the ore back to a processing facility.

The cost (and weight) of the fuel needed to rendezvous is among the most critical parameters in the feasibility calculation. It is mostly determined by the parameter “delta-V,” a measure of the kinematic requirement of accomplishing a spacecraft maneuver, and usually cited in units of kilometers per second. A rendezvous with an especially favorable NEO from a spacecraft in low-Earth orbit involves a delta-V of about four kilometers per second.

Unfortunately, reaching asteroids in the Main Belt typically involves a delta-V of about seven kilometers per second. While that may not sound like a very big difference, the fuel requirements needed for maneuvers depend exponentially on delta-V with even small changes having a huge impact, leaving Main Belt asteroids energetically very difficult to reach from Earth.

CfA astronomers Martin Elvis, Jonathan McDowell, and past Harvard undergraduate Anthony Taylor have shown that Main Belt asteroid mining could be made more profitable if spacecraft were deployed from a station in an orbit similar to that of the Martian moon Phobos, which orbits about six thousand kilometers from Mars’s surface, and which offers a lower delta-V to the Main Belt asteroids. Mars itself offers some added orbital advantages because unlike the Earth, whose orbit is nearly circular, Mars’ orbital eccentricity and inclination also provide a lower delta-V path to the asteroids.

In their study published in Planetary and Space Science, the authors suggest two-burn and three-burn scenarios (referring to the number of rocket ignitions needed) to accomplish a rendezvous, and they develop a computer code to calculate the energetics for known asteroid orbital classes. The results show potentially very significant reductions to the costs of exploration.

Whether or not a mission ultimately makes financial sense depends on many other factors, but the authors demonstrate that the concept of a launching and then returning to an operations center based in a Phobos-like orbit, or even on Phobos itself, is relatively convenient and advantageous. They add that profitable large-scale mining from Martian orbit could also lead to routine access to the Martian surface.


Citation:
Mars as a base for asteroid exploration and mining (2022, June 16)