Mars megatsunami may have been caused by Chicxulub-like asteroid impact 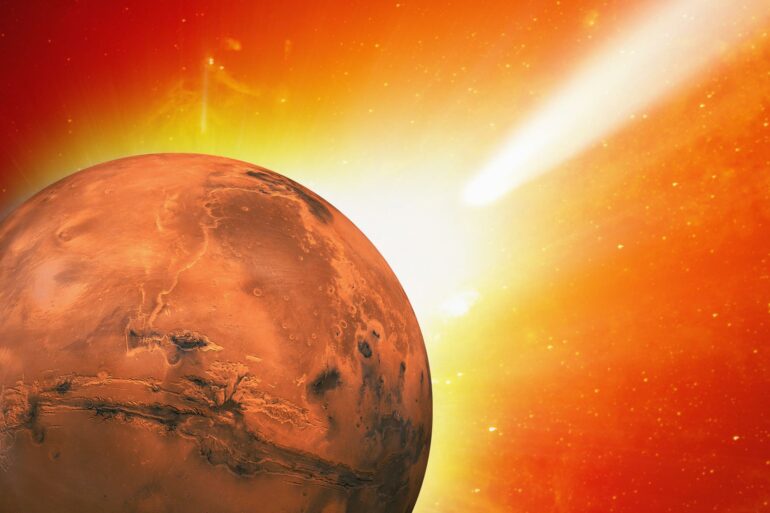 A Martian megatsunami may have been caused by an asteroid collision similar to the Chicxulub impact—which contributed to the mass extinction of all non-avian dinosaurs on Earth 66 million years ago—in a shallow ocean region, according to a study published in Scientific Reports.

Previous research has proposed that an asteroid or comet impact within an ocean in the Martian northern lowlands may have caused a megatsunami approximately 3.4 billion years ago. However, prior to this study the location of the resulting impact crater was unclear.

Alexis Rodriguez and colleagues analyzed maps of Mars’ surface, created by combining images from previous missions to the planet, and identified an impact crater that could have caused the megatsunami. The crater—which they have named Pohl—has a diameter of 110 kilometers and is located within an area of the northern lowlands that previous studies have suggested may have been covered by an ocean, in a region around 120 meters below its proposed sea level. The authors suggest that Pohl may have formed around 3.4 billion years ago based on its position above and below rocks previously dated to this time.

The authors simulated asteroid and comet collisions with this region to test what type of impact that could have created Pohl and whether this could have led to a megatsunami. They found that the simulations that formed craters with similar dimensions to Pohl were caused by either a nine kilometer asteroid encountering strong ground resistance—releasing 13 million megatons of TNT energy—or a three kilometer asteroid encountering weak ground resistance—releasing 0.5 million megatons of TNT energy.

The amount of energy released by Tsar Bomba, the most powerful nuclear bomb ever tested, was approximately 57 megatons of TNT energy.

Both simulated impacts formed craters measuring 110 kilometers in diameter and generated megatsunamis that reached as far as 1,500 kilometers from the center of the impact site. Analysis of the megatsunami caused by the three kilometer asteroid impact indicated that this tsunami may have measured up to approximately 250 meters tall on land.

The authors suggest that the aftermath of the proposed Pohl impact may have had similarities with the Chicxulub impact on Earth, which previous research has suggested occurred within a region 200 meters below sea level, generated a crater with a temporary diameter of 100 kilometers, and led to a megatsunami that was 200 meters high on land.


Citation:
Mars megatsunami may have been caused by Chicxulub-like asteroid impact (2022, December 1)