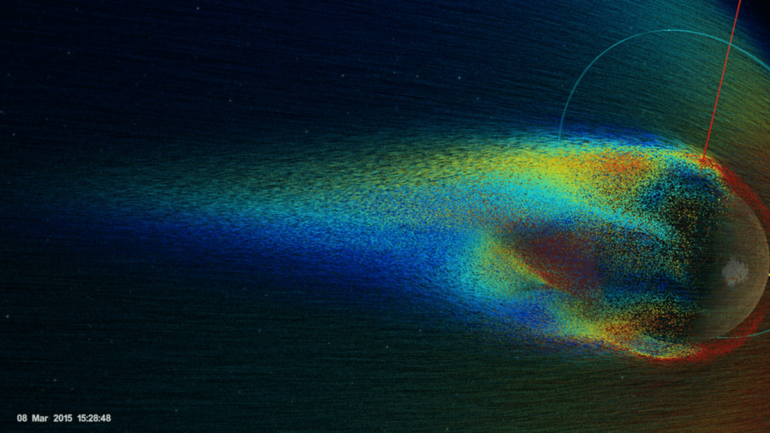 In recent decades, planetary scientists have developed ample evidence indicating that Mars was home to a relatively thick atmosphere and hosted liquid water on its surface during the Noachian, around 4 billion years ago. Since then, significant climate change occurred, resulting in the loss of much of the planet’s atmosphere and all of its surface water.

What remains of the atmosphere today is a thin envelope consisting largely of carbon dioxide. Without a protective planetary magnetic field, this, too, is being stripped away by the solar wind. Since its arrival in 2014, NASA’s Mars Atmosphere and Volatile Evolution (MAVEN) spacecraft has tracked the escape of the atmosphere’s most abundant ions, those of atomic and molecular oxygen.

In a new study, Pickett et al. attempt to extend these observations to carbon, the second most abundant element in the atmosphere. A complicating factor in observing the atmosphere’s carbon (C) ion loss is that carbon is similar in mass to the dominant species, oxygen (O). For this work, the authors use 40 orbits of data collected by MAVEN’s Suprathermal and Thermal Ion Composition (STATIC) instrument, which records the charge, mass, and velocity of incoming ions.

Because of instrumental uncertainties, STATIC registers particle impacts with a small range of masses; the distribution is centered on the true mass of a given ion. Because C+ and O+ have similar masses, these distributions overlap. Thus, contributions from the oxygen ions must be modeled and removed before the C+ population can be ascertained. The authors develop and describe a multistep process to accomplish this.

The researchers applied their method to data collected by STATIC in April 2018 as an initial assessment of the technique and a first approximation of the escape rate of C+. They estimate that C+ flows away from Mars with a flux on the order of 104–105 per centimeter squared per second down the magnetotail. This finding is broadly consistent with previous model-derived estimates of carbon loss from the atmosphere and lower by 1–2 orders of magnitude than the observed loss rate for oxygen ions.

In aggregate, STATIC found detectable C+ fluxes in about a quarter of all observations during the study period. This illustrates the persistent difficulty of disentangling the two most abundant components of the Martian atmosphere. Understanding the related, yet separate, stories of carbon and oxygen in the current atmosphere will be a future task with implications for the history of the red planet’s climate.