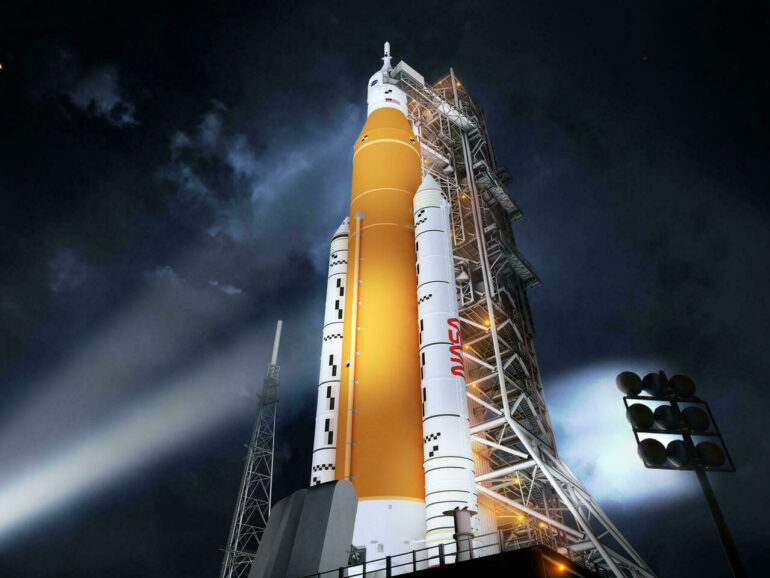 NASA’s massive new rocket is poised to make its first journey to a launchpad on Thursday ahead of a battery of tests that will clear it to blast off to the Moon this summer.

It will leave the Kennedy Space Center’s Vehicle Assembly Building at 5:00 pm Eastern Time (2100 GMT) and begin its glacially slow, 11-hour crawl on a transporter to the hallowed Launch Complex 39B, four miles (6.5 kilometers) away.

Here’s what you need to know.

With the Orion crew capsule fixed on top, the Space Launch System (SLS) Block 1 stands 322 feet (98 meters) high—taller than the Statue of Liberty, but a little smaller than the 363 feet Saturn V rockets that powered the Apollo missions to the Moon.

Despite this, it will produce 8.8 million pounds of maximum thrust (39.1 Meganewtons), 15 percent more than the Saturn V, meaning it’s expected to be the world’s most powerful rocket at the time it begins operating.

“This is a flagship rocket you’re about to see, it’s a symbol of our country,” Tom Whitmeyer, associate administrator for exploration systems development, told reporters on a call this week.

A symbol that comes at an estimated price tag of $4.1 billion per launch for the first four Artemis missions, NASA Inspector General Paul Martin told Congress this month.

Once it reaches the iconic launch pad, where 53 Space Shuttles took off, engineers have roughly two more weeks’ worth of checks before what’s known as the “wet dress rehearsal.”

On the morning of April 3, the SLS team will load more than 700,000 gallons (3.2 million liters) of cryogenic propellant into the rocket and practice every phase of launch countdown, stopping ten seconds before blast off.

The propellant will then be drained to demonstrate safely standing down a launch attempt.

To the Moon and beyond

NASA is targeting May as the earliest window for Artemis-1, an uncrewed lunar mission that will be the first integrated flight for SLS and Orion.

SLS will first place Orion into a low Earth orbit, and then, using its upper stage, perform what’s called a trans-lunar injection.

On its three-week mission, Orion will deploy 10 shoebox size satellites known as CubeSats to gather information on the deep space environment.

It will journey around the far side of the Moon and finally make its way back to Earth, where its heat shield will be tested against the atmosphere.

Splashdown takes place in the Pacific, off the coast of California.

Artemis-2 will be the first crewed test, flying around the Moon but not landing, while Artemis-3, now planned for no earlier than 2025, will see the first woman and first person of color touch down on the lunar south pole.

NASA wants to use the Moon as a proving ground for testing technologies necessary for a Mars mission, sometime in the 2030s, using a Block 2 evolution of the SLS.

Elon Musk’s company is also developing its own deep space rocket, the fully reusable Starship, which he has said should be ready for an orbital test this year.

Starship would be both bigger and more powerful than SLS: 394 feet tall with 17 million pounds of thrust. It could also be considerably cheaper.

The tycoon has suggested that within years, the cost per launch could be as little as $10 million.

Direct comparisons are complicated by the fact that while SLS is designed to fly direct to its destinations, SpaceX foresees putting a Starship into orbit, and then refueling it with another Starship so it can continue its journey, to extend range and payload.

NASA has also contracted a version of Starship as a lunar descent vehicle for Artemis.

Citation:
NASA rolls out its mega Moon rocket—here’s what you need to know (2022, March 17)