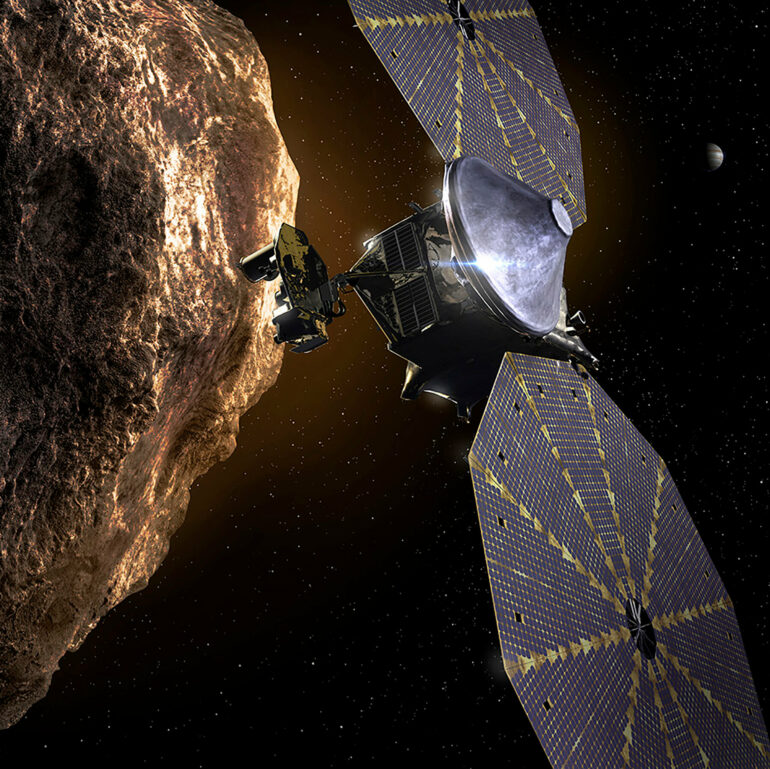 On Oct. 16, at 7:04 a.m. EDT, NASA’s Lucy spacecraft, the first mission to the Jupiter Trojan asteroids, will skim the Earth’s atmosphere, passing a mere 220 miles (350 kilometers) above the surface. By swinging past Earth on the first anniversary of its launch, Lucy will gain some of the orbital energy it needs to travel to this never-before-visited population of asteroids.

The Trojan asteroids are trapped in orbits around the sun at the same distance as Jupiter, either far ahead of or behind the giant planet. Lucy is currently one year into a twelve-year voyage. This gravity assist will place Lucy on a new trajectory for a two-year orbit, at which time it will return to Earth for a second gravity assist. This second assist will give Lucy the energy it needs to cross the main asteroid belt, where it will observe asteroid Donaldjohanson, and then travel into the leading Trojan asteroid swarm. There, Lucy will fly past six Trojan asteroids: Eurybates and its satellite Queta, Polymele and its yet unnamed satellite, Leucus, and Orus. Lucy will then return to Earth for a third gravity assist in 2030 to re-target the spacecraft for a rendezvous with the Patroclus-Menoetius binary asteroid pair in the trailing Trojan asteroid swarm.

For this first gravity assist, Lucy will appear to approach Earth from the direction of the sun. While this means that observers on Earth will not be able to see Lucy in the days before the event, Lucy will be able to take images of the nearly full Earth and moon. Mission scientists will use these images to calibrate the instruments.

Lucy’s trajectory will bring the spacecraft very close to Earth, lower even than the International Space Station, which means that Lucy will pass through a region full of earth-orbiting satellites and debris. To ensure the safety of the spacecraft, NASA developed procedures to anticipate any potential hazard, and if needed, to execute a small maneuver to avoid a collision.

“The Lucy team has prepared two different maneuvers,” says Coralie Adam, Lucy deputy navigation team chief from KinetX Aerospace in Simi Valley, California. “If the team detects that Lucy is at risk of colliding with a satellite or piece of debris, then—12 hours before the closest approach to Earth—the spacecraft will execute one of these, altering the time of closest approach by either two or four seconds. This is a small correction, but it is enough to avoid a potentially catastrophic collision.”

Lucy will be passing the Earth at such a low altitude that the team had to include the effect of atmospheric drag when designing this flyby. Lucy’s large solar arrays increase this effect.

“In the original plan, Lucy was actually going to pass about 30 miles closer to the Earth,” says Rich Burns, Lucy project manager at NASA’s Goddard Space Flight Center in Greenbelt, Maryland. “However, when it became clear that we might have to execute this flyby with one of the solar arrays unlatched, we chose to use a bit of our fuel reserves so that the spacecraft passes the Earth at a slightly higher altitude, reducing the disturbance from the atmospheric drag on the spacecraft’s solar arrays.”

At around 6:55 a.m. EDT, Lucy will first be visible to observers on the ground in Western Australia (6:55 p.m. for those observers). Lucy will quickly pass overhead, clearly visible to the naked eye for a few minutes before disappearing at 7:02 a.m. EDT as the spacecraft passes into the Earth’s shadow. Lucy will continue over the Pacific Ocean in darkness and emerge from the Earth’s shadow at 7:26 a.m. EDT. If the clouds cooperate, sky watchers in the western United States should be able to get a view of Lucy with the aid of binoculars.

“The last time we saw the spacecraft, it was being enclosed in the payload fairing in Florida,” said Hal Levison, Lucy principal investigator at the Southwest Research Institute (SwRI) Boulder, Colorado office. “It is exciting that we will be able to stand here in Colorado and see the spacecraft again. And this time Lucy will be in the sky.”

Lucy will then rapidly recede from the Earth’s vicinity, passing by the moon and taking a few more calibration images before continuing out into interplanetary space.

“I’m especially excited by the final few images that Lucy will take of the moon,” said John Spencer, acting deputy project scientist at SwRI. “Counting craters to understand the collisional history of the Trojan asteroids is key to the science that Lucy will carry out, and this will be the first opportunity to calibrate Lucy’s ability to detect craters by comparing it to previous observations of the moon by other space missions.”