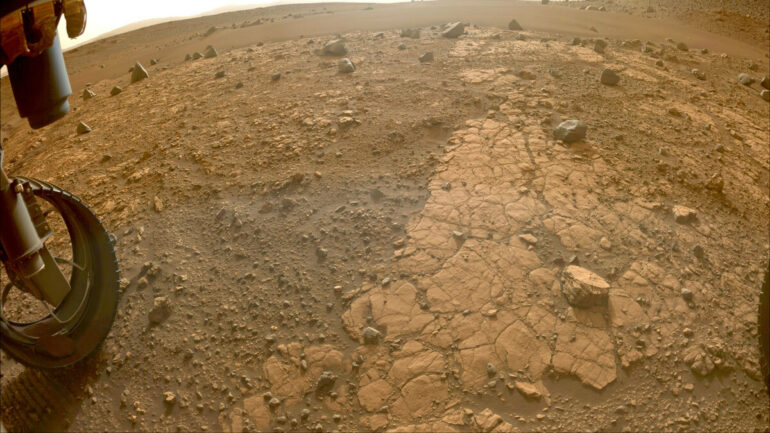 NASA’s Perseverance Mars rover has begun exploring an area the science team calls “Yori Pass” near the base of Jezero Crater’s ancient river delta. They’ve been eager to explore the region for several months after spotting a rock similar to one Perseverance collected samples from in July.

The feature is so tantalizing to the scientists because it is sandstone, which is composed of fine grains that have been carried from elsewhere by water before settling and forming stone. Perseverance’s samples are central to the first step in the NASA-ESA (European Space Agency) Mars Sample Return campaign, which began when the rover cached its first cored rock in September 2021.

“We often prioritize study of fine-grained sedimentary rocks like this one in our search for organics and potential biosignatures,” said Katie Stack Morgan, Perseverance deputy project scientist at NASA’s Jet Propulsion Laboratory in Southern California. “What’s especially interesting about the Yori Pass outcrop is that it is laterally equivalent with “Hogwallow Flats,” where we found very fine-grained sedimentary rocks. That means that the rock bed is located at the same elevation as Hogwallow, and has a large, traceable footprint visible on the surface.”

The hunt at Jezero Crater for biosignatures (any characteristic, element, molecule, substance, or feature that can serve as evidence for ancient life) is one of the Perseverance rover’s four science objectives. Along with its 14 rock-core samples, the rover has collected one atmospheric sample and three witness tubes, all of which are stored in the rover’s belly.

After it collects a sample from Yori Pass, Perseverance will drive 745 feet (227 meters) southeast to a mega sand ripple. Located in the middle of a small dune field, the ripple—called “Observation Mountain” by the science team—will be where the rover collects its first samples of regolith, or crushed rock and dust.

Scientists confirm evidence of a new class of galac­tic nebulae