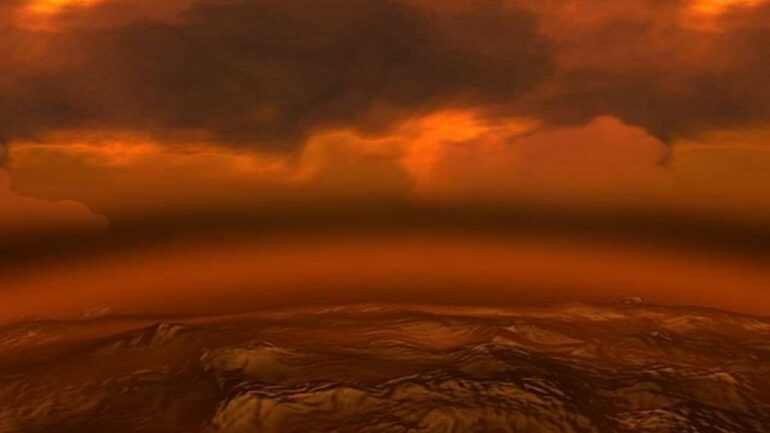 Scientists using sophisticated computational chemistry techniques have identified a new pathway for how sulfur particles can form in the atmosphere of Venus. These results may help to understand the long sought-after identity of the mysterious ultraviolet absorber on Venus.

“We know that the atmosphere of Venus has abundant SO2 and sulfuric acid particles. We expect that ultraviolet destruction of SO2 produces sulfur particles. They are built up from atomic S (sulfur) to S2, then S4 and finally S8. But how is this process initiated, that is, how does S2 form?” said Planetary Science Institute Senior Scientist James Lyons, an author on the Nature Communications paper “Photochemical and thermochemical pathways to S2 and polysulfur formation in the atmosphere of Venus.”

One possibility is to form S2 from two sulfur atoms, that is, reaction of S and S. Molecules of S2 and S2 can then combine to form S4, and so on. Sulfur particles can form either by condensation of S8 or by condensation of S2, S4 and other allotropes—different physical forms in which an element can exist—which then rearrange to form condensed S8.

“Sulfur particles, and the yellow sulfur we more commonly encounter, are made up of mostly S8, which has a ring structure. The ring structure makes S8 more stable against destruction by UV light than the other allotropes. To form S8, we can either start with two S atoms and make S2, or we can produce S2 by another pathway, which is what we’ve done in the paper,” said Lyons.

“For the first time, we are using computational chemistry techniques to determine which reactions are most important, rather than waiting for laboratory measurements to be done or using highly inaccurate estimates of the rate of unstudied reactions. This is a new and very much needed approach for studying the atmosphere of Venus,” Lyons said. “People are reluctant to go in the lab to measure rate constants for molecules made up of S, chlorine (Cl), and oxygen (O)—these are difficult and sometimes dangerous compounds to work with. Computational methods are the best—and really only—alternative.

Computational methods were used to compute the rate constants and to determine the expected reaction products. These are state-of-the-art computational models (what we call ab initio models). These ab initio calculations were done by the authors from Spain and from the University of Pennsylvania.

“This research illustrates another pathway to S2 and sulfur particle formation. Sulfur chemistry is dominant in Venus’ atmosphere, and very likely plays a key role in the formation of the enigmatic UV absorber. More generally, this work opens the doors to using molecular ab initio techniques to disentangle the complex chemistry of Venus,” Lyons said.

Uncrewed Artemis I mission to Moon pushed back