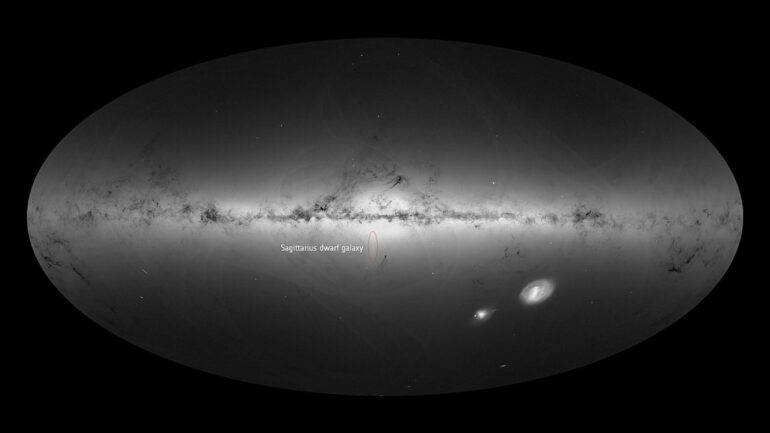 Although dark matter is a central part of the standard cosmological model, it’s not without its issues. There continue to be nagging mysteries about the stuff, not the least of which is the fact that scientists have found no direct particle evidence of it.

Despite numerous searches, we have yet to detect dark matter particles. So some astronomers favor an alternative, such as modified Newtonian dynamics (MoND) or modified gravity model. And a new study of galactic rotation seems to support them.

The idea of MoND was inspired by galactic rotation. Most of the visible matter in a galaxy is clustered in the middle, so you’d expect that stars closer to the center would have faster orbital speeds than stars farther away, similar to the planets of our solar system. What we observe is that stars in a galaxy all rotate at about the same speed. The rotation curve is essentially flat rather than dropping off. The dark matter solution is that galaxies are surrounded by a halo of invisible matter, but in 1983 Mordehai Milgrom argued that our gravitational model must be wrong.

At interstellar distances, the gravitational attraction between stars is essentially Newtonian. So rather than modifying general relativity, Milgrom proposed modifying Newton’s universal law of gravity. He argued that rather than the force of attraction as a pure inverse square relation, gravity has a small remnant pull regardless of distance. This remnant is only about 10 trillionths of a G, but it’s enough to explain galactic rotation curves.

Of course, just adding a small term to Newton’s gravity means that you also have to modify Einstein’s equations, as well. So MoND has been generalized in various ways, such as AQUAL, which stands for “a quadradic Lagrangian.” Both AQUAL and the standard LCDM model can explain observed galactic rotation curves, but there are some subtle differences.

This is where a recent study comes in. One difference between AQUAL and LCDM is in the rotation speeds of inner orbit stars vs. outer orbit stars. For LCDM, both should be governed by the distribution of matter, so the curve should be smooth. AQUAL predicts a tiny kink in the curve due to the dynamics of the theory. It’s too small to measure in a single galaxy, but statistically, there should be a small shift between the inner and outer velocity distributions.

So the author of this paper looked at high-resolution velocity curves of 152 galaxies as observed in the Spitzer Photometry and Accurate Rotation Curves (SPARC) database. He found a shift in agreement with AQUAL. The data seems to support modified gravity over standard dark matter cosmology.

The result is exciting, but it doesn’t conclusively overturn dark matter. The AQUAL model has its own issues, such as its disagreement with observed gravitational lensing by galaxies. But it is a win for the underdog theory, which has some astronomers cheering “Vive le MoND!”

The research is published on the arXiv preprint server.

Tug of sun, moon could be driving plate motions on ‘imbalanced’ Earth