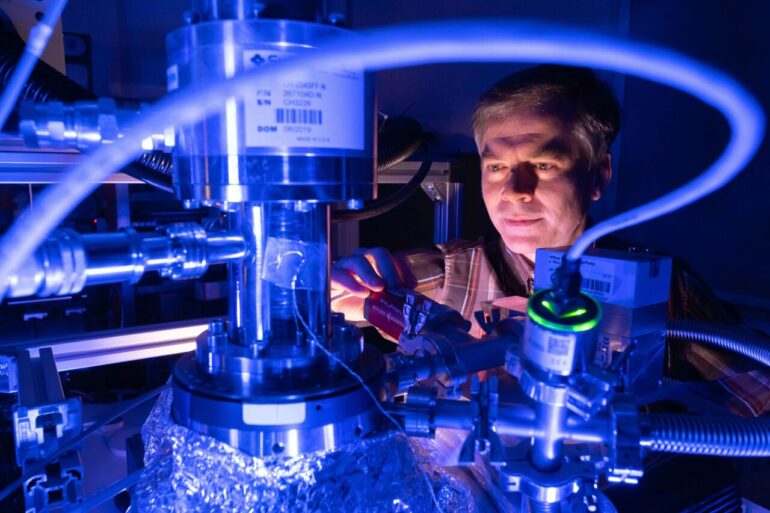 Researchers from the Friedrich Schiller University Jena and the Max Planck Institute for Astronomy have discovered a new clue in the search for the origin of life, by showing that peptides can form on dust under conditions such as those prevailing in outer space. These molecules, which are one of the basic building blocks of all life, may therefore not have originated on our planet at all, but possibly in cosmic molecular clouds.

All life as we know it consists of the same chemical building blocks. These include peptides, which perform various completely different functions in the body—transporting substances, accelerating reactions or forming stabilizing scaffolds in cells. Peptides consist of individual amino acids arranged in a specific order. The exact order determines a peptide’s eventual properties.

How these versatile biomolecules came into being is one of the questions about the origin of life. Amino acids, nucleobases and various sugars found in meteoroids, for example, show that this origin could be extraterrestrial in nature. However, for a peptide to be formed from individual amino acid molecules requires very special conditions that were previously assumed to be more likely to exist on Earth.

The first step requires water, while for the second step, there must be no water

“Water plays an important role in the conventional way in which peptides are created,” says Dr. Serge Krasnokutski of the Laboratory Astrophysics and Cluster Physics Group of the Max Planck Institute for Astronomy at the University of Jena. In this process, individual amino acids combine to form a chain. For this to happen, one water molecule must be removed each time. “Our quantum chemical calculations have now shown that the amino acid glycine can be formed through a chemical precursor—called an amino ketene—combining with a water molecule. Put simply: In this case, water must be added for the first reaction step, and water must be removed for the second.”

With this knowledge, the team led by the physicist Krasnokutski has now been able to demonstrate a reaction pathway that can take place under cosmic conditions and does not require water.

“Instead of taking the chemical detour in which amino acids are formed, we wanted to find out whether amino ketene molecules could not be formed instead and combine directly to form peptides,” says Krasnokutski, describing the basic idea behind the work. He adds, “And we did this under the conditions that prevail in cosmic molecular clouds, that is to say, on dust particles in a vacuum, where the corresponding chemicals are present in abundance: Carbon, ammonia and carbon monoxide.”

In an ultra-high vacuum chamber, substrates that serve as a model for the surface of dust particles were brought together with carbon, ammonia and carbon monoxide at about one quadrillionth of normal air pressure and minus 263 degrees Celsius.

“Investigations showed that under these conditions, the peptide polyglycine was formed from the simple chemicals,” Krasnokutski says. “These are therefore chains of the very simple amino acid glycine, and we observed different lengths. The longest specimens consisted of eleven units of the amino acid.”

In this experiment, the German team was also able to detect the suspected amino ketene. “The fact that the reaction can take place at such low temperatures at all is due to the amino ketene molecules being extremely reactive. They combine with each other in an effective polymerization. The product of this is polyglycine.”

Parker Solar Probe: A spacecraft has ‘touched’ the sun for the first time

“It was nevertheless surprising to us that the polymerization of amino ketene could happen so easily under such conditions,” says Krasnokutski. “This is because an energy barrier actually has to be overcome for this to happen. However, it may be that we are helped in this by a special effect of quantum mechanics. In this special reaction step, a hydrogen atom changes its place. However, it is so small that as a quantum particle, it could not overcome the barrier but was simply able to cross it, so to speak, through the tunneling effect.”

Now that it is clear that not only amino acids, but also peptide chains, can be created under cosmic conditions, we may have to look not only to Earth but also more into space when researching the origin of life.