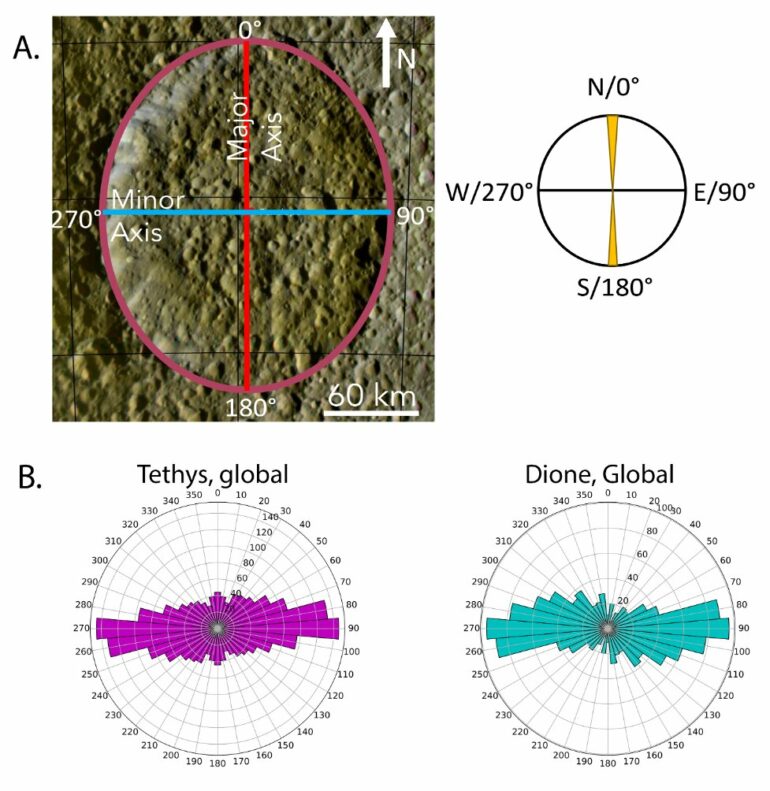 “Our work aims to answer the broader question of how old these moons are. To get at this question, my colleagues and I mapped elliptical craters on the surfaces of these moons to determine their size, direction and location on the moon,” Ferguson said.

Circular craters are very common and can be formed from a wide range of impact conditions. However, elliptical craters are rarer and form from slow and shallow impacts, which make them especially useful in determining an object’s age because shape and orientation also indicate their impactor’s trajectory.

Ferguson also mapped elliptical craters on Tethys, Saturn’s fifth largest moon, and found that a similar size-frequency distribution of craters is unusual for objects orbiting the Sun, but curiously matches estimates for the impactor population that appears to be present on Neptune’s moon, Triton. Because that population is thought to be planetocentric, or drawn in by the ice giant’s massive gravity, Ferguson’s results point to the importance of considering planetocentric impactors when examining the age of objects in the Saturnian system.

“It was really astonishing to see these patterns,” she said.

Ferguson believes the equatorial craters could have formed from independent disks of debris orbiting each moon or potentially a single disk that affected both moons.

“Using Triton as a guide, Tethys could reasonably be billions of years old. This age estimate is dependent on how much material was available for impacting the surface and when it was available,” Ferguson said. “To be certain, of course, we will need more data, but this research tells us a lot. It can give us an idea of what the formation conditions of these moons were like. Was this a system that was completely chaotic with materials hitting these satellites every which way, or was there a neat and orderly system?”

Ferguson hopes to eventually be able to compare her data from the Saturnian moons to those of Uranus, another ice giant. While current data is inconclusive, one of the flagship missions recommended by the Planetary Science Decadal Survey, which was published in April, is a mission to Uranus and its moons.

“This is the first step toward a new perspective on the cratering history of these moons and their origin and evolution,” Ferguson said.

The study is published in Earth and Planetary Science Letters.