Researchers find spaceflight may be associated with DNA mutations, increased risk of heart disease and cancer 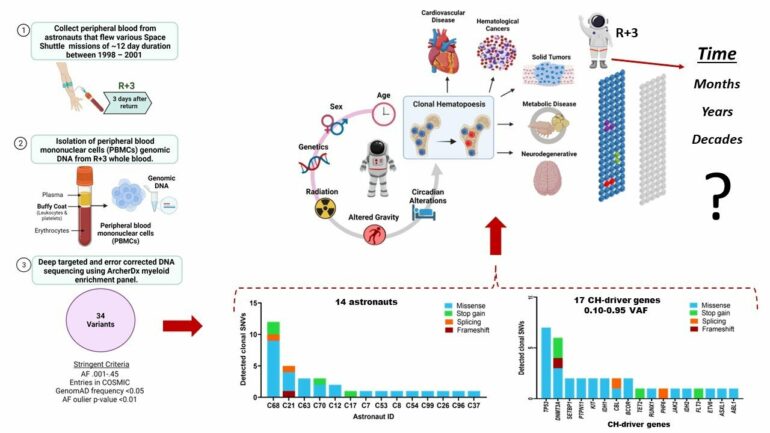 Astronauts are at higher risk for developing mutations—possibly linked to spaceflight—that can increase the risk of developing cancer and heart disease during their lifetimes, according to a first-of-its kind study from the Icahn School of Medicine at Mount Sinai.

A team of researchers collected blood samples from National Aeronautics and Space Administration (NASA) astronauts who flew space shuttle missions between 1998 and 2001. They discovered DNA mutations, known as somatic mutations, in the blood-forming system (hematopoietic stem cells) in all 14 astronauts studied.

Their findings, published in the August issue of Communications Biology, suggest that spaceflight could be associated with these mutations and emphasize the importance of ongoing blood screening of astronauts throughout their careers and during their retirement to monitor their health.

Somatic mutations are mutations that occur after a person is conceived and in cells other than sperm or egg cells, meaning they cannot be passed on to offspring. The mutations identified in this study were characterized by the overrepresentation of blood cells derived from a single clone, a process called clonal hematopoiesis (CH).

Such mutations are frequently caused by environmental factors, such as exposure to ultraviolet radiation or certain chemicals, and may be a result of cancer chemo- or radiotherapy. There are few signs or symptoms associated with CH; most patients are identified after genetic testing of their blood for other diseases. Although CH is not necessarily an indicator of disease, it is associated with a higher risk for cardiovascular disease and blood cancer.

“Astronauts work in an extreme environment where many factors can result in somatic mutations, most importantly space radiation, which means there is a risk that these mutations could develop into clonal hematopoiesis. Given the growing interest in both commercial spaceflights and deep space exploration, and the potential health risks of exposure to various harmful factors that are associated with repeated or long-duration exploration space missions, such as a trip to Mars, we decided to explore, retrospectively, somatic mutation in the cohort of 14 astronauts,” said the study’s lead author David Goukassian, MD, Professor of Medicine (Cardiology) with the Cardiovascular Research Institute at Icahn Mount Sinai.

The study subjects were astronauts who flew relatively short (median 12 days) space shuttle missions between 1998 and 2001. Their median age was approximately 42 years old; roughly 85 percent were male, and six of the 14 were on their first mission. The researchers collected whole blood samples from the astronauts 10 days before their flight and on the day of landing, and white blood cells only three days after landing. The samples were stored at -80ºC for approximately 20 years.

Using DNA sequencing followed by extensive bioinformatics analyses, researchers identified 34 mutations in 17 CH-driver genes. The most frequent mutations occurred in TP53, a gene that produces a tumor-suppressing protein, and DNMT3A, one of the most frequently mutated genes in acute myeloid leukemia.

However, the frequency of the somatic mutations in the genes that the researchers assessed was less than two percent, the technical threshold for somatic mutations in hematopoietic stem cells to be considered clonal hematopoiesis of indeterminate potential (CHIP). CHIP is more common in older individuals and is associated with increased risk of developing cardiovascular disease and both hematologic and solid cancer.

“Although the clonal hematopoiesis we observed was of a relatively small size, the fact that we observed these mutations was surprising given the relatively young age and health of these astronauts. The presence of these mutations does not necessarily mean that the astronauts will develop cardiovascular disease or cancer, but there is the risk that, over time, this could happen through ongoing and prolonged exposure to the extreme environment of deep space,” Dr. Goukassian said.

“Through this study, we have shown that we can determine the individual susceptibility of astronauts to develop disease related to their work without any implications that can affect their ability to do their work. Indeed, our studies demonstrate the importance of early and ongoing screening to assess that susceptibility. Our recommendation is that NASA, and its medical team, screen astronauts for somatic mutations and possible clonal expansion, or regression, every three to five years, and, not less importantly, well into their retirement years when somatic mutations may expand clonally and become CHIP.”

The team’s research follows previous studies that used the same samples to identify predictive biomarkers in exosomes—small lipid-layered microscopic vesicles of nucleic acids, proteins, lipids, and metabolites that form within the cells of the human body and are subsequently released into the blood circulation, hence carrying the information from their cells of origin that reflects their intercellular condition. This feature of exosomes may qualify them as great biomarkers of health and/or disease, as well as transfer information from one cell to another at great distance in the body.

When they treated human heart cells with exosomes derived from astronauts, the researchers found that the exosomes affected the biology of the vitamin D receptor, which plays a key role in bone, heart, and skeletal muscle health. They also assessed the impact of space flight on mitochondrial DNA—the genome of small organelles that supply energy to cells. In that study, the team found that the amount of cell-free mitochondrial DNA circulating in the blood of astronauts was two to 350 times higher than normal, which may lead to oxidative damage and inflammation elsewhere in the body.

“Through these studies, we have demonstrated the potential to assess the health risk of space flight among astronauts. What is important now is to conduct longitudinal retrospective and well-controlled prospective studies involving a large number of astronauts to see how that risk evolves based on continued exposure and then compare that data against their clinical symptoms, imaging, and lab results. That will enable us to make informed predictions as to which individuals are more likely to develop disease based on the phenomena we are seeing and open the door to individualized precision medicine approaches to early intervention and prevention,” said Dr. Goukassian.

Provided by
The Mount Sinai Hospital