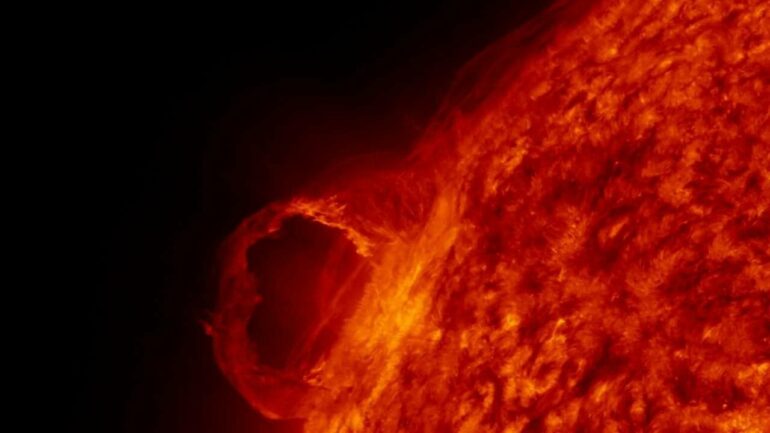 Solar prominences are large magnetic structures confining a cool and dense plasma in the hot solar corona. Typically, the prominence plasma is 100 times cooler and denser than its coronal surroundings. This phenomenon raises some important questions about the origin of the prominence plasma, and the energy and force equilibria which allow it to remain in the corona for a relatively long time.

A research team led by Dr. Wang Jincheng, Prof. Yan Xiaoli from Yunnan Observatories of the Chinese Academy of Sciences has found that the large plumes are generated from the breakup of the prominence bubble triggered by an enhancement of thermal pressure.

The study was published in Astronomy and Astrophysics.

Based on high spatial and temporal resolution Hα data from the New Vacuum Solar Telescope and simultaneous observations from the Solar Dynamics Observatory and the Solar Terrestrial Relations Observatory-Ahead, the researchers studied the dynamic and thermal properties of two large plumes in a prominence on April 14, 2021.

According to the stereoscopic observation of prominence bubble, researchers found powerful evidence to support that the bubble below the prominence was filled with hot and low-density plasma.

“Moreover, many evidences indicate that two large plumes originate from the same bubble, and are associated with the disruption of the bubble,” said Dr. Wang. The researchers found that the bubble expanded and took on a quasi-semicircular appearance before the occurrence of each large plume. And the emission intensity of extreme-ultra-violet (EUV) bands increased in the bubble during the bubble expanding.

Based on the analysis of these two large plume formations, the researchers established a model for bubble evolution and deduced the requirement for the formation of the large plume. “The bubble cannot keep its shape and begin to generate the large plumes as the bubble height exceeds half its width,” said Prof. Yan.