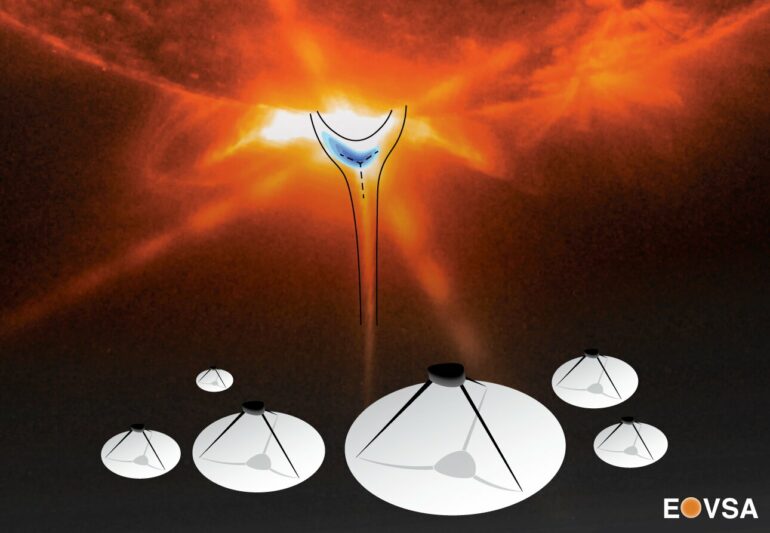 Solar flares are among the most violent explosions in our solar system, but despite their immense energy—equivalent to a hundred billion atomic bombs detonating at once—physicists still haven’t been able to answer exactly how these sudden eruptions on the sun are able to launch particles to Earth, nearly 93 million miles away, in under an hour.

Now, in a study published June 8 in Nature, researchers at New Jersey Institute of Technology (NJIT) have pinpointed the precise location where solar flare charged particles are accelerated to near-light speed.

The new findings, made possible through observations of an X-class solar flare in 2017 by NJIT’s Expanded Owens Valley Solar Array (EOVSA) radio telescope, have revealed a highly efficient particle accelerator located at the tip of the brightest point of the eruption in the sun’s outer atmosphere, called the flare’s “cusp region”, where the explosion’s ambient plasma is converted to high-energy electrons.

Researchers say the discovery of the region, measured at almost twice the volume of Earth, could open new doors for investigating fundamental processes of particle acceleration ubiquitous in the universe.

“The findings in this study help explain the long-standing mystery of how solar flares can produce so much energy in mere seconds,” said Gregory Fleishman, corresponding author of the paper and distinguished research professor of physics at NJIT’s Center for Solar-Terrestrial Research. “The flare unleashes its power in a much vaster region of the sun than expected by the classic model of solar flares. Although others have postulated this must happen, this is the first time the specific size, shape, and location of this key region has been identified, and the efficiency of the energy conversion to particle acceleration inside the flare has been measured.”

The discovery follows separate studies from 2020 published in Science and Nature Astronomy, where EOVSA’s detailed snapshots of the flare and changes in the sun’s magnetic field—taken at hundreds of radio frequencies at once—initially gave the NJIT team a lead on the location.

“Our recent studies suggested the flare cusp could be the location where such high-energy electrons are produced, but we weren’t certain,” explained Bin Chen, NJIT associate professor and a co-author of the paper. “We had originally uncovered a magnetic bottle-like structure at the site that contained an overwhelmingly large number of electrons compared to anywhere else in the flare, but now with the new measurements of this study, we can more confidently say this is the flare’s particle accelerator.”

Using the unique microwave imaging capabilities of EOVSA, the team was able to measure the energy spectrum of electrons at hundreds of locations of an X-class solar flare triggered by a reconfiguration of magnetic field lines along the sun’s surface on September 10, 2017.

“EOVSA’s spectral imaging gave us a comprehensive map of the flare’s thermal plasma as it evolved second-by-second. But to our surprise, what we found was a mysterious hole in the thermal plasma map that began developing at the flare’s cusp,” said Gelu Nita, NJIT research professor and co-author of the paper. “More than that, as thermal particles in the region disappeared, the hole was then densely filled with non-thermal, high-energy particles.”

The team’s analysis brought to light an incredibly efficient energy conversion process within the solar flare’s particle accelerator, where intense energy from the sun’s magnetic fields is rapidly released and transferred to kinetic energy inside the region.

“We wondered how efficient this energy conversion process would be … how many particles in this area would be accelerated beyond the explosion’s thermal energy?” added Sijie Yu, study co-author and NJIT assistant research professor. “Using extreme ultraviolet data of the sun, we confirmed that virtually no particles remained inside the region at thermal energies below a few million Kelvin, consistent with the EOVSA measurement that the particles had all been accelerated to non-thermal energies greater than 20 keV, or nearly 100 million Kelvin.”

The team now says these latest findings could help scientists study fundamental questions in particle physics not possible on Earth, as well as offer fresh insights into how such high-energy particles from the sun may impact Earth during future space weather events.

“An important aspect of this study is that it directs the attention of theorists to the precise location where most of the energy release and particle acceleration occurs, and provides quantitative measurements to guide numerical models,” says Dale Gary, NJIT distinguished professor and director of EOVSA. “However, to extend our measurements to much broader flare regions and weaker but more frequent flare events, we are developing a next-generation, solar-dedicated radio array called the Frequency Agile Solar Radiotelescope, which will be at least 10 times larger and orders of magnitude more powerful.”

“We still want to investigate the physical mechanism driving particle acceleration in solar flares. But future studies must account for what we now know about these enormous explosions—both the main energy release at the cusp region and the 100% efficiency at which charged particle acceleration occurs,” said Fleishman. “These findings call for a major revision to the models we use to study solar flares and their impact on Earth.”

SpaceX satellites falling out of orbit after solar storm