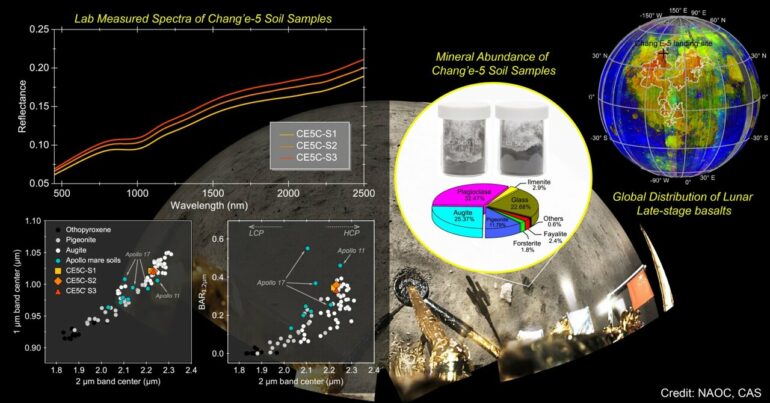 Active volcanic activity helped create the moon’s surface minerology as recently as 2 billion years ago, leaving an iron-rich and high-calcium surface of basalts geographically younger than the lunar geology community previously thought, according to a study that analyzed soil samples brought back as part of the Chang’E-5 (CE-5) mission in 2020.

A team of researchers led by Prof. Li Chunlai from the National Astronomical Observatories of the Chinese Academy of Sciences (NAOC) published their findings on Oct. 10 in Nature Communications. The study employed both spectroscopic and X-ray diffraction (XRD) analysis techniques to infer the mineral composition of lunar soil samples brought back by CE-5.

“Near-side lunar soil samples we analyzed turned out to be primarily pyroxene,” said Prof. Li. “This came as a surprise to us, because earlier remote sensing-based studies indicated a high abundance of olivine—another common volcanic mineral composite in the basalt category.”

Studies based on Apollo and Luna-era missions suggested lunar mare (a term for the dark basaltic plains formed by volcanic activity triggered by ancient large asteroid impacts on the far side of the moon) was shaped by active volcanism between 4.3 billion and 3.1 billion years ago, with most of that activity between 3.6 billion and 3.8 billion years ago. Those older studies were based on data collected from Earth-based telescopes as well as moon orbiters, such as NASA’s Moon Minerology Mapper.

“Though we can infer a lot about mineral composition of the moon remotely, having actual lunar soil samples here on Earth in our lab for analyses opened up the possibility of a much more thorough and precise compositional analysis,” Li said.

“Preliminary works have identified that the CE-5 returned soil sample is basically comprised of a type of lunar basalt that have never been sampled before,” Li and his team wrote in their Oct. 10 paper. “In comparison with the mare samples collected from previous missions, the bulk composition of pyroxene in CE-5 samples is relatively iron and calcium-rich based on electron microprobe analysis.”

To analyze the samples, the researchers measure the wavelengths of light absorbed and reflected when exposed to precisely calibrated X-ray and visible light emissions. What each sample reflects is mapped according to wavelength on an X-axis and intensity on a Y-axis, generating a spectrographic fingerprint.

“There was such a striking similarity among the three samples,” Li said, “and that suggests to us that the iron-rich pyroxene we observed is similar across other near-side mare. This greatly enhances our understanding of the minerology of the near side of our moon.”

Li and his team’s study follows other recent developments that have intrigued lunar scientists as well as the astronomy community as a whole, including news earlier this year also generated by CE-5 returned samples signaling that there may be water on the moon in the form of subterranean trapped ice.

“These are exciting new developments for lunar geologists,” Li said. “Additional samples brought back as part of future missions will continue to further our understanding of the moon’s surface and have potentially big implications for space exploration, as the scientific community finds ways to utilize the moon’s minerology, and possibly water.”