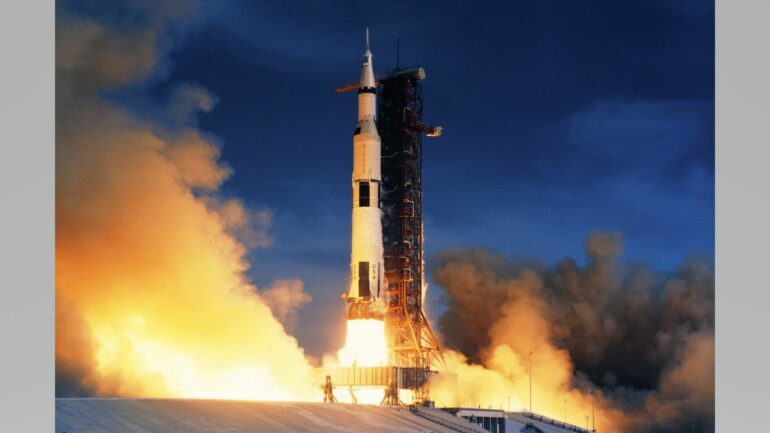 The Saturn V carried man to the moon and remains the most powerful rocket to successfully launch to orbit. It captures the imagination—but sometimes, it might capture a bit too much imagination. Abundant internet claims about the acoustic power of the rocket suggest that it melted concrete and lit grass on fire over a mile away.

Such ideas are undeniably false. In The Journal of the Acoustical Society of America, researchers from Brigham Young University used a physics-based model to estimate the acoustic levels of the Saturn V. They obtained a value of 203 decibels, which matched the very limited data from the 1960s.

To put that number into perspective, commercial jet engines range from around 120 to 160 decibels.

“Decibels are logarithmic, so every 10 decibels is an order of magnitude increase,” said author Kent L. Gee, of BYU. “One hundred and seventy decibels would be equivalent to 10 aircraft engines. Two hundred would be 10,000 engines!”

While the Saturn V was extremely loud, that kind of power is nowhere near enough to melt concrete or start grass fires. If reports about these phenomena are true, they likely stem from radiative heating via the plume or debris.

Some of the misunderstanding comes from confusing sound power with sound pressure. The former is like the wattage from a light bulb. The latter is like the brightness from the same bulb: It depends on how far away you’re standing. Mistakes in calculations, changes to the decibel reference system, and the propagation of misinformation have also led to compounding errors.

“The Saturn V has taken on this sort of legendary, apocryphal status,” said Gee. “We felt that, as part of the JASA special issue on Education in Acoustics, it was an opportunity to correct misinformation about this vehicle.”

NASA’s Space Launch System (SLS) Artemis 1 launch is scheduled for the fall of this year, when it will send humans back to the moon and surpass the Saturn V in terms of power and noise. The researchers have used their framework to predict SLS’s sound levels, and they plan to make acoustical measurements at its launch to help to further refine predictions.

The team also provided educational tools, like homework problems, to share their findings with college-level physics classrooms. They hope this rocket’s story will show the importance of critically examining data and scientific discussions online.

The article “Saturn-V sound levels: A letter to the Redditor” is authored by Kent L. Gee, Logan T. Mathews, Mark C. Anderson, and Grant W. Hart. The article will appear in The Journal of the Acoustical Society of America on Aug. 23, 2022.

Mars may have less water than previously estimated