Scientists collaborate with astronomers around the world to understand distant galaxy 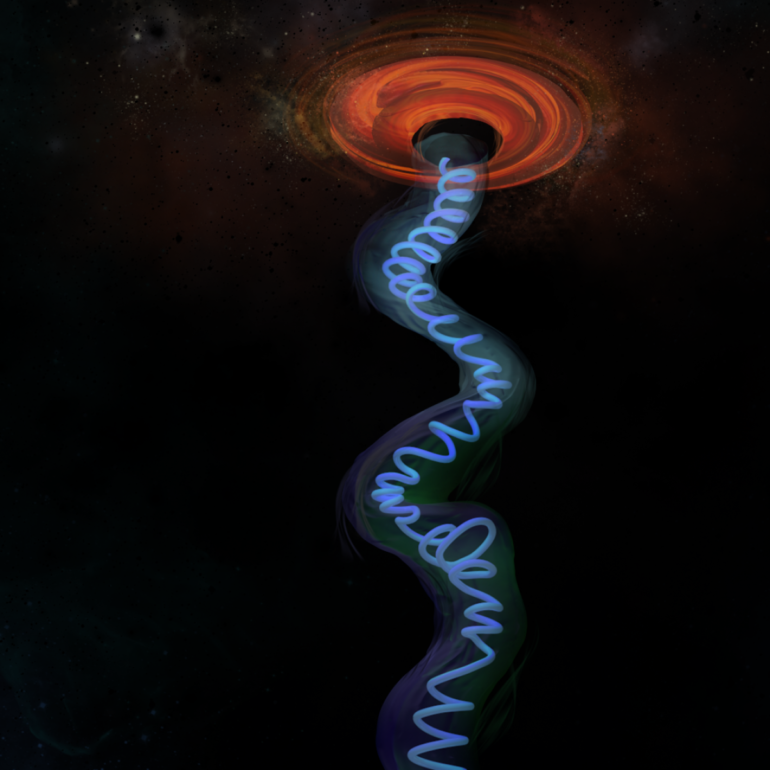 A team of 86 scientists from 13 countries recently carried out extensive high-time resolution optical monitoring of a distant active galaxy, BL Lacertae (BL Lac). Mike Joner, BYU research professor of physics and astronomy, was one of the astronomers contributing to the project.

Dr. Joner and BYU undergraduate student Gilvan Apolonio secured over 200 observations of the galaxy using the 0.9-meter reflecting telescope at the BYU West Mountain Observatory. Their measurements were combined with observations made by other scientists around the world in a collaboration known as the Whole Earth Blazar Telescope (WEBT). The WEBT network makes it possible to monitor objects around the clock from different locations during times of high variability.

Using the WEBT observations made in the summer of 2020, astronomers discovered surprisingly rapid oscillations of brightness in the central jet of the galaxy BL Lac. The scientists attribute these cycles of brightness change to twists in the jet’s magnetic field. Their study was recently published in Nature.

BYU’s West Mountain Observatory was one of 37 ground-based telescopes throughout the world monitoring the optical variations of BL Lac—an active galaxy classified as a blazar that is roughly 1 billion light years away. Joner and Apolonio alternated working different groups of nights at the observatory throughout the spring and summer of 2020—a task that was extra burdensome during the height of the pandemic. This atypical work schedule was necessary since observations were needed on every clear night and there were no other trained student observers remaining in the Provo area.

An analysis of the high-cadence optical observations was critical to understanding the high-energy observations from the space-based Fermi Gamma-Ray Telescope.

Although he’s an established expert in astrophysical research, Joner says he continues to be amazed at the level of detail scientists are capturing through such observations. And he’s grateful for the chance to explore the far reaches of the cosmos with his students at BYU.

“On a galactic scale, the central jet of a blazar is quite small. It is amazing to be able to see the variations of the jet so clearly. The variability of the jet is easily seen even though it is combined with the light from the hundreds of billions of stars in the host galaxy,” he said.

“It is noteworthy that in this age of giant telescopes and space-based research, it is still necessary to rely on modest sized and well-equipped facilities like we have available at BYU to explore the unknown reaches of the universe.”

Boston University doctoral student Melissa Hallum, a BYU graduate and former student of Dr. Joner’s, was also a co-author of the paper.


Citation:
Scientists collaborate with astronomers around the world to understand distant galaxy (2022, October 5)