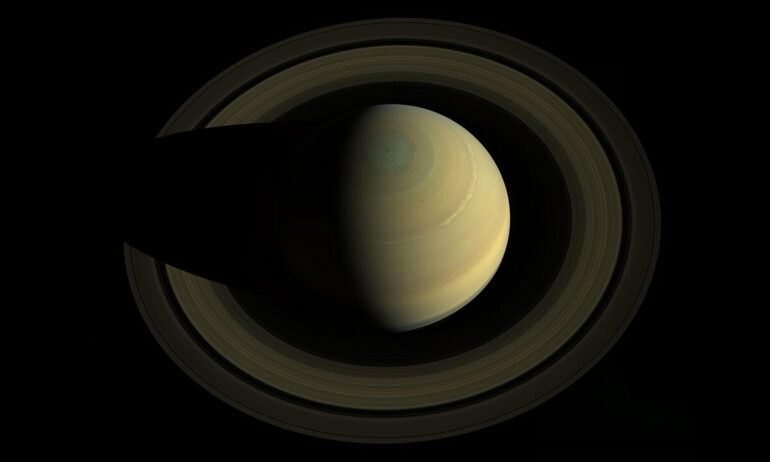 Southwest Research Institute scientists have compiled 41 solar occultation observations of Saturn’s rings from the Cassini mission. The compilation, published recently in the journal Icarus, will inform future investigations of the particle size distribution and composition of Saturn’s rings, key elements to understanding their formation and evolution.

“For nearly two decades, NASA’s Cassini spacecraft shared the wonders of Saturn and its family of icy moons and signature rings, but we still don’t definitively know the origins of the ring system,” said Dr. Stephanie Jarmak, a researcher in the SwRI Space Science Division. “Evidence indicates that the rings are relatively young and could have formed from the destruction of an icy satellite or a comet. However, to support any one origin theory, we need to have a good idea of the size of particles making up the rings.”

Cassini’s Ultraviolet Imaging Spectrograph (UVIS) was uniquely sensitive to some of the smallest ring particles, particularly with the observations it made in the extreme ultraviolet wavelength.

To determine the size of the ring particles, UVIS observed them when the instrument was pointed at the sun, looking through the rings in what is known as a solar occultation. Ring particles partially blocked the path of the light, providing a direct measurement of the optical depth, a key parameter for determining the size and composition of the ring particles.

“Given the wavelength of the light coming from the sun, these observations gave us insight into the smallest particle sizes with Saturn’s rings,” Jarmak said. “UVIS can detect dust particles at the micron level, helping us understand the origin, collisional activity and destruction of the ring particles within the system.”

The compilation also delves into the variations in the optical depth of occultation observations, which can help determine particle size and composition. During an occultation, light emitted by a background source, such as the sun, is absorbed and scattered by the particles in the light’s path. The amount of light blocked by ring particles provides a direct measurement of the ring optical depth.

Including optical depth is vital to understanding the structure of the rings. The research measured the optical depth as a function of the viewing geometry, which refers to the observation angles of the ring system with respect to the Cassini spacecraft. As light passing through the rings changes at various angles, scientists can form a picture of the rings’ structures.

“Ring systems around giant planets also provide test beds for investigating fundamental physical properties and processes in our solar system in general,” Jarmak said. “These particles are thought to result from objects colliding and forming in a disk and building up larger particles. Understanding how they form these ring systems could help us understand how planets form as well.”

The paper appears in Icarus.