Scientists get first-ever sound recording of dust devils on Mars 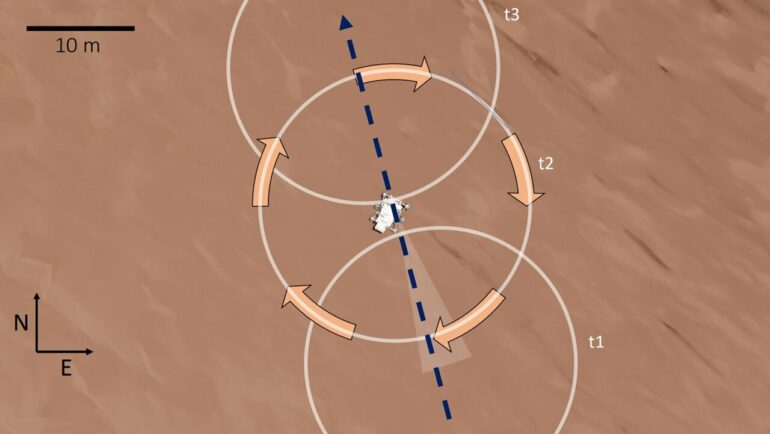 When the rover Perseverance landed on Mars, it was equipped with the first working microphone on the planet’s surface. Scientists have used it to make the first-ever audio recording of an extraterrestrial whirlwind.

The study was published in Nature Communications by planetary scientist Naomi Murdoch and a team of researchers at the National Higher French Institute of Aeronautics and Space and NASA. Roger Wiens, professor of Earth, atmospheric and planetary sciences in Purdue University’s College of Science, leads the instrument team that made the discovery. He is the principal investigator of Perseverance’s SuperCam, a suite of tools that comprise the rover’s “head” that includes advanced remote-sensing instruments with a wide range of spectrometers, cameras and the microphone.

“We can learn a lot more using sound than we can with some of the other tools,” Wiens said. “They take readings at regular intervals. The microphone lets us sample, not quite at the speed of sound, but nearly 100,000 times a second. It helps us get a stronger sense of what Mars is like.”

The microphone is not on continuously; it records for about three minutes every couple of days. Getting the whirlwind recording, Wiens said, was lucky, though not necessarily unexpected. In the Jezero Crater, where Perseverance landed, the team has observed evidence of nearly 100 dust devils—tiny tornadoes of dust and grit—since the rover’s landing. This is the first time the microphone was on when one passed over the rover.

The sound recording of the dust devil, taken together with air pressure readings and time-lapse photography, help scientists understand the Martian atmosphere and weather.

“The wind is fast—about 25 miles per hour, but about what you would see in a dust devil on Earth. The difference is that the air pressure on Mars is so much lower that the winds, while just as fast, push with about 1% of the pressure the same speed of wind would have back on Earth. It’s not a powerful wind, but clearly enough to loft particles of grit into the air to make a dust devil.”

The information indicates that future astronauts will not have to worry about gale-force winds blowing down antennas or habitats—so future Mark Watneys won’t be left behind—but the wind may have some benefits. The breezes blowing grit off the solar panels of other rovers—especially Opportunity and Spirit—may be what helped them last so much longer.

“Those rover teams would see a slow decline in power over a number of days to weeks, then a jump. That was when wind cleared off the solar panels,” Wiens said.

The lack of such wind and dust devils in the Elysium Planitia where the InSight mission landed may help explain why that mission is winding down.

“Just like Earth, there is different weather in different areas on Mars,” Wiens said. “Using all of our instruments and tools, especially the microphone, helps us get a concrete sense of what it would be like to be on Mars.”