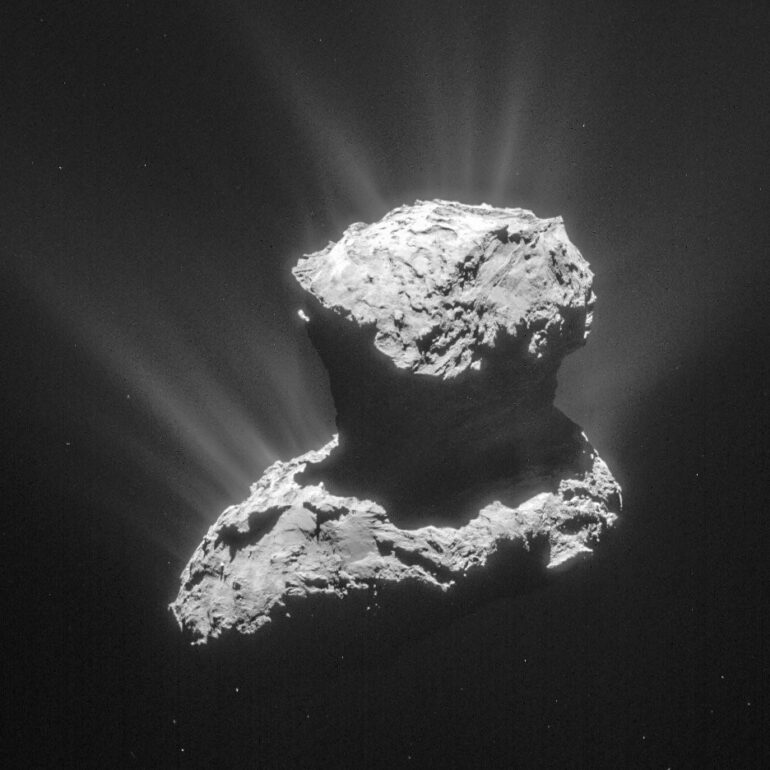 A team of researchers led by the University of Bern has for the first time identified an unexpected richness of complex organic molecules at a comet. This was achieved thanks to the analysis of data collected during ESA’s Rosetta mission at comet 67P/Churyumov-Gerasimenko, also known as Chury. Delivered to the early Earth by impacting comets, these organics may have helped to kick-start carbon-based life as we know it.

Comets are fossils from the ancient times and from the depths of our solar system, and they are relics from the formation of the sun, planets, and moons. A team led by chemist Dr. Nora Hänni of the Physics Institute of the University of Bern, Department of Space Research and Planetary Sciences, has now succeeded for the first time in identifying a whole series of complex organic molecules at a comet as they report in a study published at the end of June in the journal Nature Communications.

In the mid-1980s, a fleet of spacecraft was sent out by the large space agencies to fly past Halley’s comet. Onboard were several mass spectrometers that measured the chemical composition of both the comet’s coma—the thin atmosphere due to sublimation of cometary ices close to the sun—and also that of impacting dust particles. However, data collected by these instruments did not have the resolution needed to allow for unambiguous interpretation.

Now, more than 30 years later, the high-resolution mass spectrometer ROSINA, a Bern-led instrument onboard ESA’s Rosetta spacecraft, collected data at comet 67P/Churyumov-Gerasimenko, also known as Chury, between 2014 and 2016. These data now allow the researchers to shed light for the first time on the complex organic budget of Chury.

The secret was hidden in the dust

When Chury reached its perihelion, the closest point to the sun, it became very active. Sublimating cometary ices created outflow that dragged along dust particles. Expelled particles were heated up by solar irradiation to temperatures beyond those typically experienced at the cometary surface. This allows larger and heavier molecules to desorb, making them available to the high-resolution mass spectrometer ROSINA-DFMS (Rosetta Orbiter Sensor for Ion and Neutral Analysis-Double Focusing Mass Spectrometer).

The astrophysicist Prof. em. Dr. Kathrin Altwegg, Principal Investigator of the ROSINA instrument and co-author of the new study, says, “Due to the extremely dusty conditions, the spacecraft had to retreat to a safe distance of a bit more than 200 km above the cometary surface in order for the instruments to be able to operate under steady conditions.” Hence, it was possible to detect species composed of more than a handful of atoms which had previously remained hidden in the cometary dust.

The interpretation of such complex data is challenging. However, the Bernese team of researchers successfully identified a number of complex organic molecules, which have never been found in a comet before. “We found for instance naphthalene, which is responsible for the characteristic smell of mothballs. And we also found benzoic acid, a natural component of incense. In addition, we identified benzaldehyde, widely used to confer almond flavor to foods, and many other molecules. These heavy organics would apparently make Chury’s scent even more complex, but also more appealing,” Hänni says.

Apart from fragrant molecules, many species with so-called prebiotic functionality have also been identified in Chury’s organics budget (e.g., formamide). Such compounds are important intermediates in the synthesis of biomolecules (e.g., sugars or amino acids). “It therefore seems likely that impacting comets—as essential suppliers of organic material—also contributed to the emergence of carbon-based life on Earth,” explains Hänni.

Similar organics in Saturn and meteorites

In addition to the identification of individual molecules, the researchers also carried out a detailed characterization of the full ensemble of complex organic molecules in comet Chury, allowing to put it into the larger solar system context. Parameters like the average sum formula of this organic material or the average bonding geometry of the carbon atoms in it are of importance for a broad scientific community, ranging from astronomers to solar system scientists.

“It turned out that, on average, Chury’s complex organics budget is identical to the soluble part of meteoritic organic matter,” explains Hänni. “Moreover, apart from the relative amount of hydrogen atoms, the molecular budget of Chury also strongly resembles the organic material raining down on Saturn from its innermost ring, as detected by the INMS mass spectrometer onboard NASA’s Cassini spacecraft.”

“We do not only find similarities of the organic reservoirs in the solar system, but many of Chury’s organic molecules are also present in molecular clouds, the birthplaces of new stars,” says Prof. Dr. Susanne Wampfler, astrophysicist at the Center for Space and Habitability (CSH) at the University of Bern and co-author of the publication. “Our findings are consistent with and support the scenario of a shared presolar origin of the different reservoirs of solar system organics, confirming that comets indeed carry material from the times long before our solar system emerged.”