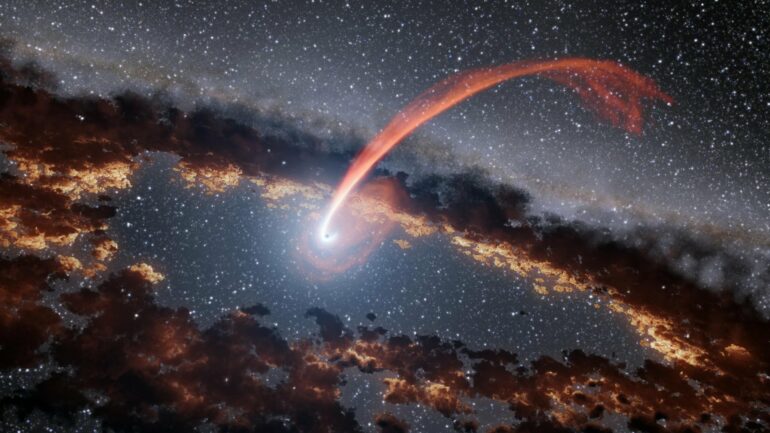 In the eROSITA all-sky survey, scientists at the Max Planck Institute for Extraterrestrial Physics (MPE) have found an interesting repeating event. In an otherwise quiescent galaxy, an X-ray flare repeats every 220 days, indicating that a star orbiting the central black hole “feeds” the gravity monster on subsequent orbits. Such events could be effective tools to explore the accretion process and the gravity field around supermassive black holes in other galaxies.

The findings are published in the journal Astronomy & Astrophysics.

Most galaxies harbor a supermassive black hole at their center, and observations suggest a symbiotic growth of the central black hole and the host galaxy. These studies mainly concentrate on “active” galaxies, i.e., those where the central black hole persistently accretes large amounts of matter, which heats up and shines very brightly. However, these active galaxies (or active galactic nuclei, AGN) are vastly outnumbered by quiescent galaxies, in which it is much harder to infer the presence of the nuclear supermassive black hole.

Occasionally, a star might wander too close to the central black hole in a galaxy and be disrupted by its strong tidal forces, in a so called “tidal disruption event.” These events result in the star losing its material to the black hole, temporarily increasing the fueling rate of the gravity monster, and producing an X-ray flare as the stellar matter is consumed.

Occurring roughly once every 10,000 years per galaxy, tidal disruption events are rare, and most observed candidates to-date are one-off events that show only a single flare due to the destruction of the star. Recently, a few transients have been reported that show periodic or repeating flares. These could be due to stars that are fortunate to survive their first encounter. Instead of being disrupted completely, the remnant orbits the supermassive black hole, losing parts of its outer layers and fueling the black hole with each passage.

“Such repeating partial disruption events could be effective tools to explore the accretion process around supermassive black holes,” points out Zhu Liu, the lead author of the study at MPE. “With eROSITA we found a very intriguing repeating nuclear transient in an otherwise quiescent galaxy.”

During its all-sky survey, the eROSITA X-ray telescope observed every position on the sky multiple times, thereby uncovering high-energy transients in galaxies that showed no signatures of prior activity at their centers. The new source, J0456-20, discovered in February 2021, is located in a quiescent galaxy about 1 billion light-years away. It is one of the most variable X-ray sources seen by eROSITA, with the X-ray flux dropping by a factor of 100 within a week.

“We estimate that the star orbiting the black hole lost the equivalent of 5%, 1.5% and 0.5% of the mass of our Sun in its first, second, and third visit, respectively,” explains Adam Malyali, a postdoc at MPE. “These losses are small enough that the star could survive several partial disruption episodes.”

Through a collaboration with the Australian ATCA facility, the scientists also discovered transient radio emission from J0456-20, indicating the launch of an outflow of gas or a jet. Together with the characteristic X-ray evolution, there is compelling evidence for changes in the structure of the accretion disk around the supermassive black hole.

“More follow-up observations are needed to pin down the exact details of the physical processes,” says Andrea Merloni, eROSITA principal investigator. “Nevertheless, the discovery of this repeating X-ray event already provides solid evidence that there are stars in tightly bound orbits around supermassive black holes beyond our own Milky Way galaxy. These offer ideal laboratories to test General Relativity in the strong field regime.”

eROSITA has already found other repeating X-ray sources, e.g., two quasi-periodic eruptions in AGN. In the future, the scientists expect to discover more events with eROSITA, and the upcoming Einstein Probe mission.