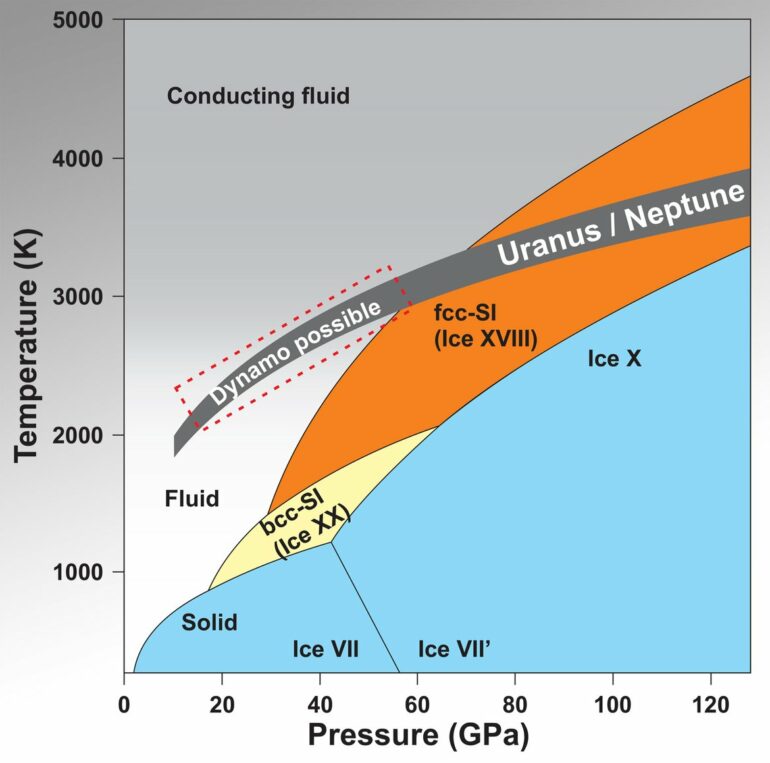 Ordinary everyday ice, like the ice produced by a fridge, is known to scientists as hexagonal ice (ice Ih), and is not the only crystalline phase of water. More than 20 different phases are possible. One of them, called “superionic ice” or “ice XVIII,” is of particular interest, among other reasons, because it is thought to make up a large part of Neptune and Uranus, planets frequently referred to as “ice giants.”

In the superionic crystalline phase, water loses its molecular identity (H2O): negative oxygen ions (O2-) crystallize into an extensive lattice, and protons in the form of positive hydrogen ions (H+) form a liquid that floats around freely within the oxygen lattice.

“The situation can be compared to a metal conductor such as copper, with the big difference that positive ions form the crystal lattice in the metal, and electrons bearing a negative charge are free to wander around the lattice,” said Maurice de Koning, a professor at the State University of Campinas’s Gleb Wataghin Physics Institute (IFGW-UNICAMP) in São Paulo state, Brazil.

De Koning led the study that resulted in an article published in Proceedings of the National Academy of Sciences (PNAS) and featured on the cover of its November 8, 2022 issue.

Superionic ice forms at extremely high temperatures in the range of 5,000 Kelvin (4,700 °C) and pressure of around 340 gigapascals, or over 3.3 million times Earth’s standard atmospheric pressure, he explained. It is therefore impossible for stable superionic ice to exist on our planet.

It can exist on Neptune and Uranus, however. In fact, scientists are confident that large amounts of ice XVIII lurk deep in their mantles, thanks to the pressure resulting from these giants’ huge gravitational fields, as confirmed by seismographic readings.

“The electricity conducted by the protons through the oxygen lattice relates closely to the question of why the axis of the magnetic field doesn’t coincide with the rotation axis in these planets. They’re significantly misaligned, in fact,” De Koning said.

Measurements made by the space probe Voyager 2, which flew by these distant planets on its journey to the edge of the Solar System and beyond, show that the axes of Neptune’s and Uranus’s magnetic fields form angles of 47 degrees and 59 degrees with their respective rotation axes.

On Earth, an experiment reported in Nature in 2019 succeeded in producing a tiny amount of ice XVIII for 1 nanosecond (a billionth of a second), after which the material disintegrated. The researchers used laser-driven shock waves to compress and heat liquid water.

According to the paper in Nature, six high-power laser beams were fired in a temporally tailored sequence to compress a thin water layer encapsulated between two diamond surfaces. The shock waves reverberated between the two stiff diamonds to achieve a homogeneous compression of the water layer resulting in the superionic crystalline phase for an extremely short time.

“In this latest study, we didn’t perform a real physical experiment but used computer simulations to investigate the mechanical properties of ice XVIII and find out how its deformations influence the phenomena seen to occur on Neptune and Uranus,” De Koning said.

A key aspect of the study was the deployment of density functional theory (DFT), a method derived from quantum mechanics and used in solid-state physics to resolve complex crystalline structures. “First of all, we investigated the mechanical behavior of a flawless phase, which doesn’t exist in the real world. We then added defects to see what kinds of macroscopic deformations resulted,” he explained.

Crystal defects are typically point defects characterized by ion vacancies or intrusion of ions from other materials into the crystal lattice. Not so in this case. De Koning was referring to linear defects known as “dislocations,” which are due to angular differences between adjacent layers resulting in puckering somewhat like a rumpled rug.

“In crystal physics, dislocation was postulated in 1934 but first observed experimentally in 1956. It’s a type of defect that explains a great many phenomena. We say dislocation is to metallurgy what DNA is to genetics,” De Koning said.

In the case of superionic ice, the sum of dislocations produces shear, a macroscopic deformation familiar to mineralogists, metallurgists and engineers. “In our study, we calculated, among other things, how much it’s necessary to force the crystal for it to break up owing to shear,” De Konig said.

To this end, the researchers had to consider a relatively large cell of the material with about 80,000 molecules. The calculations entailed extremely heavy and sophisticated computational techniques, including neural networks, machine learning, and the composition of various configurations based on DFT.

“This was a most interesting aspect of the study, integrating knowledge in metallurgy, planetology, quantum mechanics and high-performance computing,” he said.