The seven-year photobomb: Distant star’s dimming was likely a ‘dusty’ companion getting in the way, astronomers say 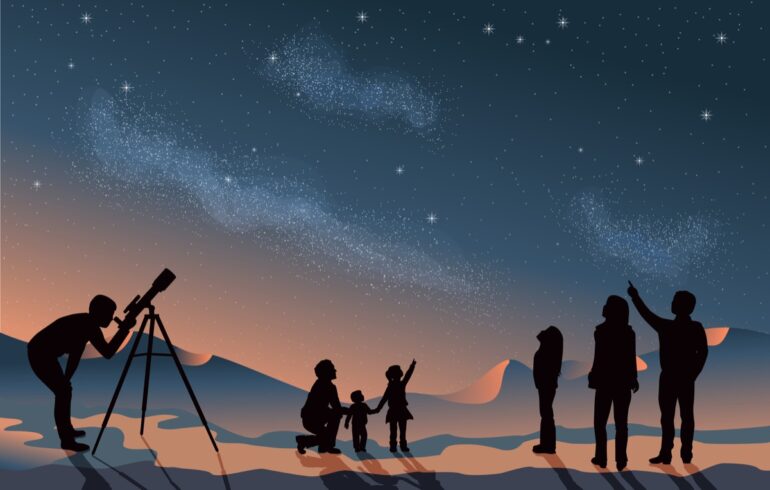 By their own admission, Anastasios “Andy” Tzanidakis and James Davenport are interested in unusual stars. The University of Washington astronomers were on the lookout for “stars behaving strangely” when an automated alert from the Gaia survey pointed them to Gaia17bpp. Survey data indicated that this star had gradually brightened over a 2 1/2-year period.

As Tzanidakis will report on Jan. 10 at the 241st meeting of the American Astronomical Society in Seattle, follow-up analyses indicated that Gaia17bpp itself wasn’t changing. Instead, the star is likely part of a rare type of binary system, and its apparent brightening was the end a years-long eclipse by an unusual stellar companion.

“We believe that this star is part of an exceptionally rare type of binary system, between a large, puffy older star—Gaia17bpp—and a small companion star that is surrounded by an expansive disk of dusty material,” said Tzanidakis, a UW doctoral student in astronomy. “Based on our analysis, these two stars orbit each other over an exceptionally long period of time—as much as 1,000 years. So, catching this bright star being eclipsed by its dusty companion is a once-in-a-lifetime opportunity.”

Since the Gaia spacecraft’s observations about the star only went back to 2014, Tzanidakis and Davenport, a UW research assistant professor of astronomy and associate director of the DiRAC Institute, had to do a little detective work to reach this conclusion. First, they stitched together Gaia’s observations of the star with observations by other missions stretching back to 2010—including Pan-STARRS1, WISE/NEOWISE and the Zwicky Transient Facility.

Those observations, coupled with the Gaia data, showed that Gaia17bpp dimmed by about 4.5 orders of magnitude—or roughly 45,000 times. The star remained dim over the course of nearly seven years, from 2012 to 2019. The sudden brightening that the Gaia survey had uncovered was the end of that seven-year dim.

No other stars near Gaia17bpp showed similar dimming behavior. Through the DASCH program, a digital catalog of more than a century’s worth of astro-photographic plates at Harvard, Tzanidakis and Davenport analyzed observations of the star stretching back to the 1950s.

“Over 66 years of observational history, we found no other signs of significant dimming in this star,” said Tzanidakis.

The two believe that Gaia17bpp is part of a rare type of binary star system, with a stellar companion that is—quite simply—dusty.

“Based on the data currently available, this star appears to have a slow-moving companion that is surrounded by a large disk of material,” said Tzanidakis. “If that material were in the solar system, it would extend from the sun to Earth’s orbit, or farther.”

A handful of other similar, “dusty” systems have been identified over the years, most notably Epsilon Aurigae, a star in the constellation Auriga that is eclipsed for two out of every 27 years by a relatively large, dim companion.

The system that Tzanidakis and Davenport discovered is unique among these few dusty binaries in the length of the eclipse—at nearly seven years, it is by far the longest. Unlike the Epsilon Aurigae binary, Gaia17bpp and its companion are also so far apart that it would be centuries or more before an astute observer on Earth witnesses another such eclipse.

For Epsilon Aurigae and similar systems, the identity of the dusty companion is a matter of debate. Some preliminary data indicate that Gaia17bpp’s companion could be a small, massive white dwarf star. The source of its debris disk is also a mystery.

“This was a serendipitous discovery,” said Tzanidakis. “If we had been a few years off, we would’ve missed it. It also indicates that these types of binaries might be much more common. If so, we need to come up with theories about how this type of pairing even arose. It’s definitely an oddity, but it might be much more common than anyone has appreciated.”

Additional team members on this study are Eric Bellm, a UW research assistant professor of astronomy, and David Wang, a UW graduate student in astronomy.


Citation:
The seven-year photobomb: Distant star’s dimming was likely a ‘dusty’ companion getting in the way, astronomers say (2023, January 10)