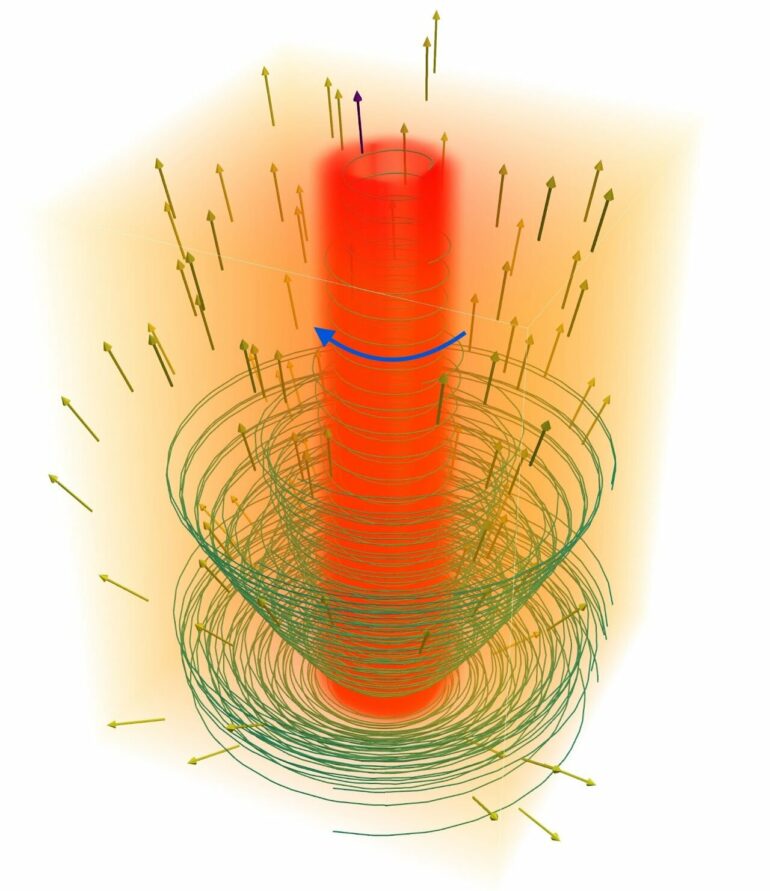 Protostellar jets are intriguing signposts of star formation. They appear as cylindrical structures, emanating from protostars (baby stars) and propagating away at highly supersonic speeds. They are believed to be launched from accretion disks around the protostars, playing an important role in facilitating the feeding process of the protostars. However, their origin is still a mystery.

An international research team, led by Chin-Fei Lee at Academia Sinica Institute of Astronomy and Astrophysics (ASIAA, Taiwan), has spatially resolved a nearby rotating protostellar jet and discovered a radial flow at its base, using the Atacama Large Millimeter/submillimeter Array (ALMA). This radial flow validates a central prediction of the popular magneto-centrifugal theory of jet formation and collimation, namely, the jet is the densest part of a wide-angle wind that flows radially outward at distances far from the (small, sub- au) launching region. This wide-angle wind, which can transport material from inner to outer disk, could account for the chondrules and Ca-Al-rich inclusions detected in the Solar System at large distances.

“Since the jets appear cylindrical, it was natural to think that they were ejected along the jet axis. Therefore, we always wonder if they could really be the densest cores of the wide-angle winds ejected radially at the base by magneto-centrifugal forces, as predicted in current magneto-centrifugal models, e.g., the X-wind model,” says Chin-Fei Lee. “Our detection of a radial flow at the base of the HH 212 jet clearly supports this prediction.” As shown in Figure 1, as the wind flows radially outward from the launching region, inner streamlines are gradually collimated by the “hoop stresses” associated with the toroidal magnetic field into a dense cylindrical jet along the axis, as seen in the observations.

HH 212 is a nearby protostellar jet in Orion at a distance of about 1300 ly. The central protostar is very young with an age of only ~ 40,000 yrs (which is about 10 millionth of the age of Our Sun) and a mass of ~ 0.25 Msun. It accretes material actively through an accretion disk. The jet is ejected from the center of the accretion disk (see Figure 2a), allowing disk material to fall onto the protostar. Previously with ALMA, we found the jet to be rotating. Here we also discovered a radial flow at its base. We found that a magneto-centrifugal model, e.g., the X-wind model (Figure 2c), reproduces not only its structure (Figure 2b) and rotation, but also the increase of its velocity range toward the protostar by the radial flow at the base.

This research was presented in a paper “Magnetocentrifugal Origin for Protostellar Jets Validated through Detection of Radial Flow at the Jet Base” by Lee et al. appeared in The Astrophysical Journal Letters.

Provided by
Academia Sinica Institute of Astronomy and Astrophysics