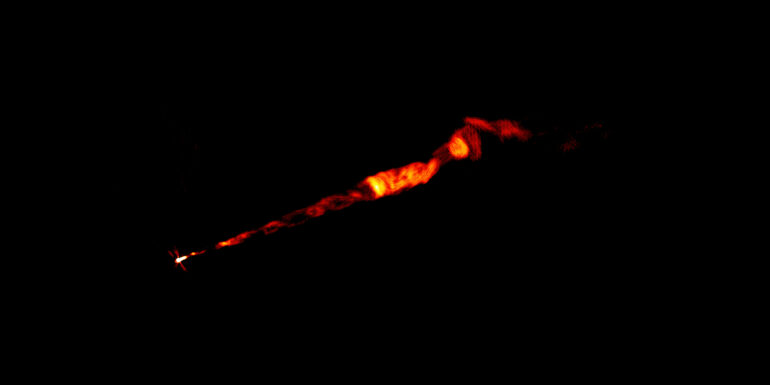 Astronomers using the National Science Foundation’s Karl G. Jansky Very Large Array (VLA) have shown that a jet of material propelled from the core of a giant galaxy is channeled by a corkscrew-shaped magnetic field out to nearly 3,300 light-years from the galaxy’s central supermassive black hole. That is much farther than such a magnetic field previously had been detected in a galactic jet.

“By making high-quality VLA images at several different radio wavelengths of the galaxy Messier 87 (M87), we were able to reveal the 3-dimensional structure of the magnetic field in this jet for the first time,” said Alice Pasetto of the National Autonomous University of Mexico, leader of the team. “The material in this jet traces a double helix, similar to the structure of DNA,” she added.

M87 is a giant elliptical galaxy about 55 million light-years from Earth. A supermassive black hole some 6.5 billion times more massive than the Sun lurks at the center of M87. That black hole is the first one ever to be imaged—an achievement done with the world-wide Event Horizon Telescope (EHT) collaboration and announced in 2019. Earlier this year, new EHT images traced the magnetic field in the vicinity of the black hole event horizon.

Pasetto and her colleagues used the VLA to reveal details of the magnetic field by tracing the polarization, or alignment, of radio waves emitted from it, and by measuring the field’s strength across different parts of the jet. Their observations, made using the VLA’s widest configuration that provides the highest resolution, produced very detailed images of the galaxy’s jet.

“Helical magnetic fields are expected close to the black hole, and are thought to play a highly important role in channeling the material into a narrow jet, but we didn’t expect to find such a strong helical field extending so far outward,” said Jose M. Marti, of the University of Valencia.

The astronomers think that this interaction between instabilities in the flow and the magnetic field is what produces the double-helix structure shown by the VLA images. If this is happening in the M87 jet, it likely also is happening in similar jets from galaxies throughout the Universe, they said.

“M87 is relatively near to us and its jet is very powerful, making it an excellent target for study. The clues it gives us can help us understand this very important and ubiquitous phenomenon in the Universe,” said Jose L. Gomez, of IAA-CSIC, Granada.

The scientists are reporting their findings in the Astrophysical Journal Letters.

A solar illusion: Coronal loops may not be what they seem