Watching the death of a rare giant star 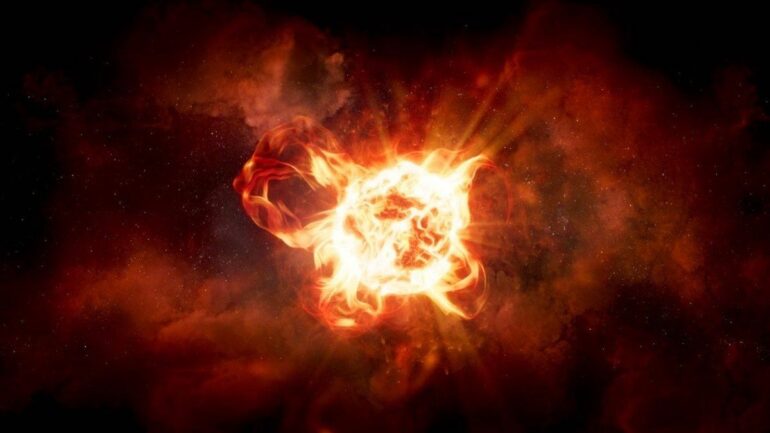 A University of Arizona-led team of astronomers has created a detailed, three-dimensional image of a dying hypergiant star. The team, led by UArizona researchers Ambesh Singh and Lucy Ziurys, traced the distribution, directions and velocities of a variety of molecules surrounding a red hypergiant star known as VY Canis Majoris.

Their findings, which they presented on June 13 at the 240th Meeting of the American Astronomical Society in Pasadena, California, offer insights, at an unprecedented scale, into the processes that accompany the death of giant stars. The work was done with collaborators Robert Humphreys from the University of Minnesota and Anita Richards from the University of Manchester in the United Kingdom. The team plans to publish its findings in a series of papers.

Extreme supergiant stars known as hypergiants are very rare, with only a few known to exist in the Milky Way. Examples include Betelgeuse, the second brightest star in the constellation Orion, and NML Cygni, also known as V1489 Cygni, in the constellation Cygnus. Unlike stars with lower masses—which are more likely to puff up once they enter the red giant phase but generally retain a spherical shape—hypergiants tend to experience substantial, sporadic mass loss events that form complex, highly irregular structures composed of arcs, clumps and knots.

Located about 3,009 light-years from Earth, VY Canis Majoris—or VY CMa, for short—is a pulsating variable star in the slightly southern constellation of Canis Major. Spanning anywhere from 10,000 to 15,000 astronomical units (with 1 AU being the average distance between Earth and the sun) VY CMa is possibly the most massive star in the Milky Way, according to Ziurys.

“Think of it as Betelgeuse on steroids,” said Ziurys, a Regents Professor with joint appointments in UArizona Department of Chemistry and Biochemistry and Steward Observatory, both part of the College of Science. “It is much larger, much more massive and undergoes violent mass eruptions every 200 years or so.”

The team chose to study VY CMa because it is one of the best examples of these types of stars.

“We are particularly interested in what hypergiant stars do at end of their lives,” said Singh, a fourth-year doctoral student in Ziurys’ lab. “People used to think these massive stars simply evolve into supernovae explosions, but we are no longer sure about that.”

“If that were the case, we should see many more supernovae explosions across the sky,” Ziurys added. “We now think they might quietly collapse into black holes, but we don’t know which ones end their lives like that, or why that happens and how.”

Previous imaging of VY CMa with NASA’s Hubble Space Telescope and spectroscopy showed the presence of distinct arcs and other clumps and knots, many extending thousands of AU from the central star. To uncover more details of the processes by which hypergiant stars end their lives, the team set out to trace certain molecules around the hypergiant and map them to preexisting images of the dust, taken by the Hubble Space Telescope.

“Nobody has been able to make a complete image of this star,” Ziurys said, explaining that her team set out to understand the mechanisms by which the star sheds mass, which appear to be different from those of smaller stars entering their red giant phase at the end of their lives.

“You don’t see this nice, symmetrical mass loss, but rather convection cells that blow through the star’s photosphere like giant bullets and eject mass in different directions,” Ziurys said. “These are analogous to the coronal arcs seen in the sun, but a billion times larger.”

The team used the Atacama Large Millimeter Array, or ALMA, in Chile to trace a variety of molecules in material ejected from the stellar surface. While some observations are still in progress, preliminary maps of sulfur oxide, sulfur dioxide, silicon oxide, phosphorous oxide and sodium chloride were obtained. From these data, the group constructed an image of the global molecular outflow structure of VY CMa on scales that encompassed all ejected material from the star.

“The molecules trace the arcs in the envelope, which tells us molecules and dust are well-mixed,” Singh said. “The nice thing about emissions of molecules at radio wavelengths is that they provide us with velocity information, as opposed to the dust emission, which is static.”

By moving ALMA’s 48 radio dishes into different configurations, the researchers were able to obtain information about the directions and velocities of the molecules and map them across the different regions of the hypergiant’s envelope in considerable detail, even correlating them to different mass ejection events over time.

“So far, we have processed almost a terabyte from ALMA, and we still receive data that we have to go through to get the best resolution possible,” he said. “Just calibrating and cleaning the data requires up to 20,000 iterations, which takes a day or two for each molecule.”

“With these observations, we can now put these on maps on the sky,” Ziurys said. “Until now, only small portions of this enormous structure had been studied, but you can’t understand the mass loss and how these big stars die unless you look at the entire region. That’s why we wanted to create a complete image.”