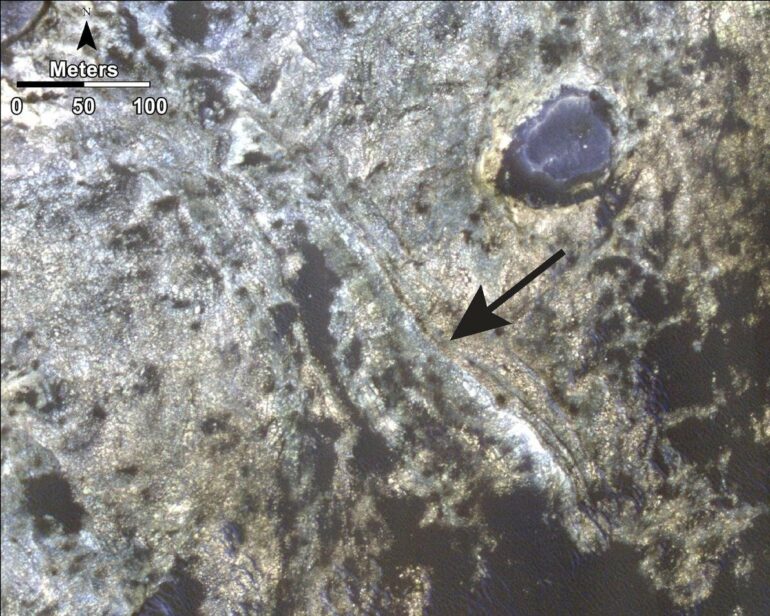 A new paper based on exploration by the NASA’s Curiosity Mars rover—and reviewed by an astronaut while she was on the International Space Station (ISS), in what may be a first for peer-reviewed science literature—describes how dramatically different geology on Mars works from that on Earth.

The paper is part of an ongoing attempt to understand the rock cycle on the red planet—that is, how rock layers are formed, altered, and destroyed—which would provide something of a Rosetta Stone for geologists that would enable them to decipher and interpret the observations and samples obtained by current and future Mars missions.

The key finding of this particular paper is that the seemingly gentle force of wind erosion drives the process that reveals stratified layers of rock on Mars. This is in stark contrast to Earth, where rock layers are revealed through the dynamic combination of tectonic activity that drives chunks of land upward, and water erosion from rivers that cuts into those rocks from the top down.

“The work of erosion on Mars is driven principally by the wind which acts like a feather duster over hundreds of millions to even billions of years. This is very different from Earth, for instance, where the extreme ruggedness of the San Gabriel mountains is created by torrents of rain water dissecting the landscape over relatively brief periods of geologic time,” says John P. Grotzinger, the Harold Brown Professor of Geology and the Ted and Ginger Jenkins Leadership Chair of the Division of Geological and Planetary Sciences.

Grotzinger is the former project scientist of the Curiosity mission and a coauthor on the Mars erosion paper, which was published on June 8 in the Journal of Geophysical Research: Planets (JGR). The lead author of the paper, Jessica Watkins, worked with Grotzinger while she was a postdoctoral researcher at Caltech. In June 2017, Watkins was selected as a NASA astronaut and in April 2022, she launched into space to work on the ISS. Watkins finished writing the JGR paper while a postdoc at Caltech and submitted it to the journal as she went into astronaut training. By the time proofs of the paper were ready for her to review, she was in space—so she gave her final input on the paper from low-Earth orbit.

The rock cycle on Earth versus Mars

To imagine the differences between landform formation on Earth and on Mars, think of the Himalaya Mountains in Asia, home to Mt. Everest. The mountains are pushed upward because of tectonic forces that drive the Indian subcontinent into Asia, but as they do, the Indus River steadily cuts down through the rising landmass. The result of both processes is the exposure of rock strata that geologists use to learn more about the planet’s evolution and history.

Despite the observance of small marsquakes by Mars InSight lander, Mars lacks the tectonic plates that cause most of the shaking on Earth. Instead, the red planet is almost entirely shaped by shaped by eolian, or wind, erosion.

Mars’s atmospheric volume is just 1 percent that of Earth, so one might not expect wind erosion to be so important on the planet. In recent decades geologists argued that the impact of modern wind acting to cause erosion on Mars is very limited. And yet, it now appears that wind erosion plays a key role in driving the rock cycle on Mars, certainly during its earlier history prior to 3 billion years ago when the rocks at Gale Crater were being formed and then eroded.

Gale Crater is a 96-mile-diameter dry lake just below the equator of Mars. As Curiosity trundled across it, the rover traced the Murray Formation, a 300-meter-thick layer of stratified mudstone that is named in honor of the late Bruce Murray, a Caltech professor of planetary science and former head of Jet Propulsion Laboratory (JPL), which Caltech manages for NASA. Mudstone is rock that formed from fine-grained mud that was compressed over time.

Studying Curiosity’s observations, Watkins, Grotzinger, and their colleagues noted that the Murray formation—which was formed from sediments deposited by water—has been eaten away from the top down. Further, the sediments deposited on top display a cross-bedding that is indicative of ancient sand dunes marching across a desert, driven by wind. On the whole, the landscape looks like a wet environment that was taken over by the Gobi Desert.

“Gale Crater is a spectacular place where you’re able to document multiple cycles of erosion,” Grotzinger says. “All of this helps us understand how Mars works overall, and will inform scientists interpreting the observations of the Perseverance rover as well.”

The article is titled “Burial and Exhumation of Sedimentary Rocks Revealed by the Base Stimson Erosional Unconformity, Gale Crater, Mars.”