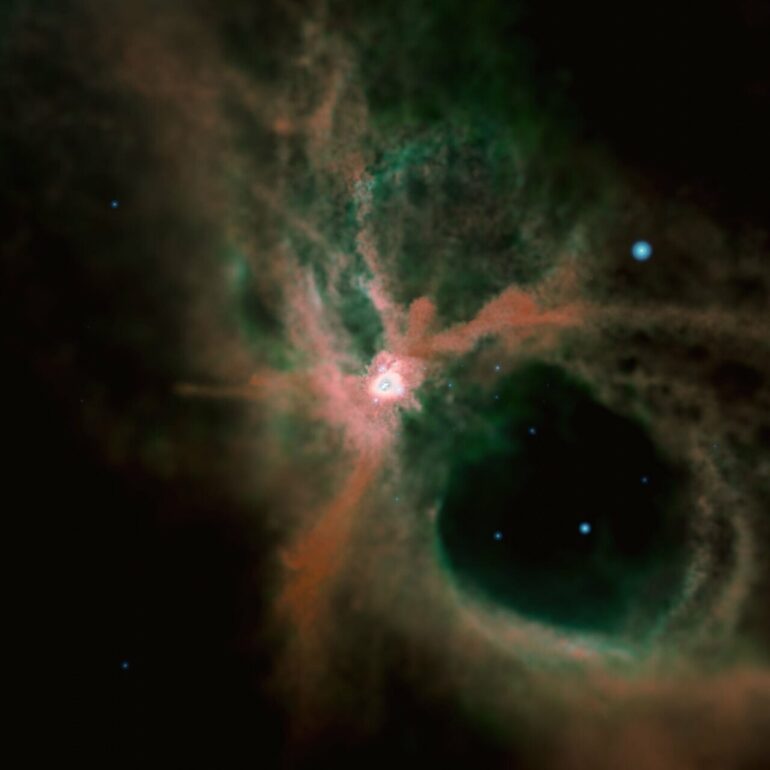 Astronomers have developed a new model to simulate the formation of a cluster of baby stars. Comparison with the well-known real case of the Orion Nebula shows that its off-center bubble of ionized gas was caused by a massive star that was pushed out of the newborn cluster but is now falling back in.

Groups of stars often form together in clouds of cold hydrogen gas. The brightest and most massive stars ionize the surrounding gas, making it too hot to form new stars. In this way massive stars act as a feedback, shutting off new star formation. The role of these massive stars is important for understanding the overall process of star formation.

A team of researchers led by Michiko Fujii at the University of Tokyo spent two years developing a simulation code which can accurately reproduce the motions of individual stars. They then simulated a case similar to the Orion Nebula using ATERUI II operated by the National Astronomical Observatory of Japan (NAOJ), the world’s most powerful supercomputer dedicated to astronomy simulations.

“The velocity distribution of the stars in the simulation matches the result from observations,” explains Yoshito Shimajiri, a research team member at NAOJ, “The simulations show that massive, bright, young stars can be ejected from the cluster through gravitational interactions with other stars.”

Kohei Hattori also at NAOJ, who performed part of the analysis, continues, “Some of these ejected stars run away, never to return. In other cases, like what is observed in the Orion Nebula, a massive star can be thrown a distance from the cluster, where it initiates an ionized bubble, and then fall back into the cluster.”

Fujii comments on the future potential of this research, “This simulation is not the limit of our simulation code. If we use a larger number of CPUs, it can treat even more massive star clusters. Next we want to undertake the first star-by-star star-cluster formation simulation of globular clusters, which are 100 times more massive than the star cluster we simulated in this study.”

These results appeared in Monthly Notices of the Royal Astronomical Society on June 8, 2022.

Ejection nebula of supernova Cassiopeia A does not expand evenly