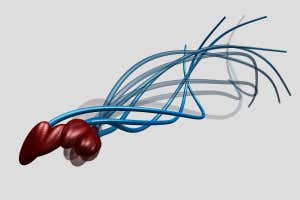 Sperm swim differently to how we thought. Rather than undulating their tails symmetrically, like an eel, they have a lopsided wiggle that combines with spinning about their long axis to give an overall forward motion.

“The asymmetry cancels out because of the rotation,” says Hermes Gadêlha at the University of Bristol, UK. “They are like otters when they swim in a corkscrew motion.”

Human sperm were some of the first living cells to be seen under a microscope, by Dutchman Anton van Leeuwenhoek in 1677, when he viewed his own sperm retrieved after sex with his wife. The scientist later described them as having a “snakelike movement, like eels in water”. And this view persisted until now.

Gadêlha’s team has made the best yet video of a sperm’s motion, by using a 3D camera recording at 55,000 frames a second combined with a microscope that moves the sample up and down very fast so all different parts of the tail come into focus.

This showed that the whip-like tail beats asymmetrically, in that it only wiggles to one side. Alone, this would send the sperm swimming in circles – but the second aspect of sperm movement, spinning about their long axis, ensures they travel forwards.

“Imagine you could only swim with one leg – you would swim in circles,” says Gadêlha. “But if you rotated from one side to another as you swam, you would balance out…