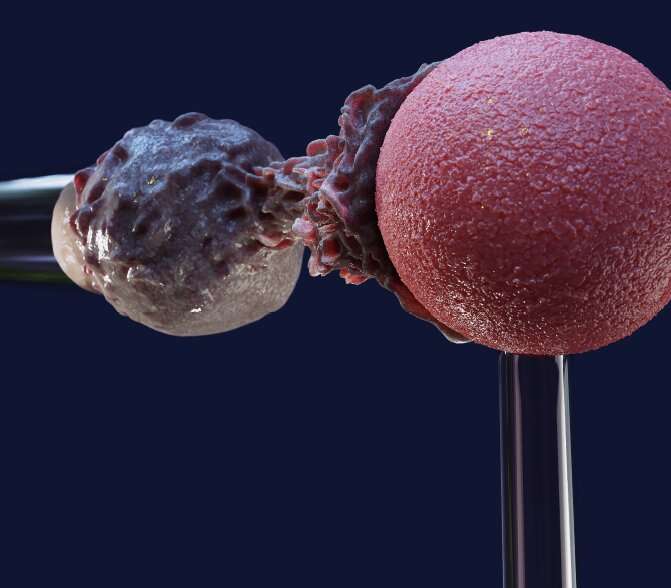 Like a well-trained soldier, a white blood cell uses specialized abilities to identify and ultimately destroy dangerous intruders, including creating a protrusion to effectively reach out, lock-on, probe, and possibly attack its prey. Researchers reporting March 16 in Biophysical Journal show in detail that these cells take seconds to morph into these highly rigid and viscous defensive units.

Senior author Julien Husson, a biophysicist at École Polytechnique near Paris, and collaborators showed previously that certain white blood cells, called T cells, can push and pull perceived threats via specialized connections. To exert such forces, a cell must reorganize its internal structure, making itself more rigid. In the current study, Husson’s team devised a micropipette rheometer to measure the rigidity, along with the viscosity, of a white blood cell during its transformation. The researchers’ goal was to quantify the physical changes that arise in a white blood cell as it pushes or pulls on a foreign body—in this case, a bead coated with chemicals to attract the cell.

“We knew that when forming and using its protrusion, the cell was strongly reorganizing its cytoskeleton and that this cytoskeleton is a big player in giving a cell its mechanical properties,” says Husson. “So, I believed there should be some signature mechanical trace.”

Stiffness is a measure of how much a material deforms when under a certain amount of pressure, whereas viscosity refers to how fast the material deforms under this pressure. Therefore, to simultaneously measure these properties of a white blood cell while instigating the cell’s immune response, the team needed an experimental setup that could somehow both maintain and vary the force on the cell while also causing it to respond as if it come upon a threat.

The researchers’ solution was to apply a force that carefully oscillated around a constant, average value. The cell’s stiffness was calculated from the tiny deformation induced by the oscillations, and the viscosity was calculated from the delay between an oscillation and resulting deformation. At the same time, the object applying the force was a bead coated with antibodies, which caused the cell to activate, change shape, and latch onto the bead.

“Despite expecting some mechanical changes, what we found was surprisingly dramatic,” says Husson. The team looked at three types of white blood cells and discovered that in all cases, “the cells’ stiffnesses and viscosities begin changing within seconds of coming into contact with the beads and increase up to ten times within minutes.”

“Intriguingly,” Husson says, “the mechanical changes begin even before any shape changes,” evoking the question of whether these significant changes to white blood cells’ mechanical properties are simply consequences of other functions or have their own utility.

The answer to this question could lie in another result of the study: Husson and colleagues found that a cell’s stiffness and viscosity change together, at a fixed ratio that is unique to the cell type, like a mechanical fingerprint. “It was really exciting to know that there was this kind of universality,” he says.

Altogether, the paper’s results suggest an underlying physical mechanism that could apply broadly across cell types and lead to new models, theories, and ultimately a better understanding and control of our cells, in our immune system and beyond.