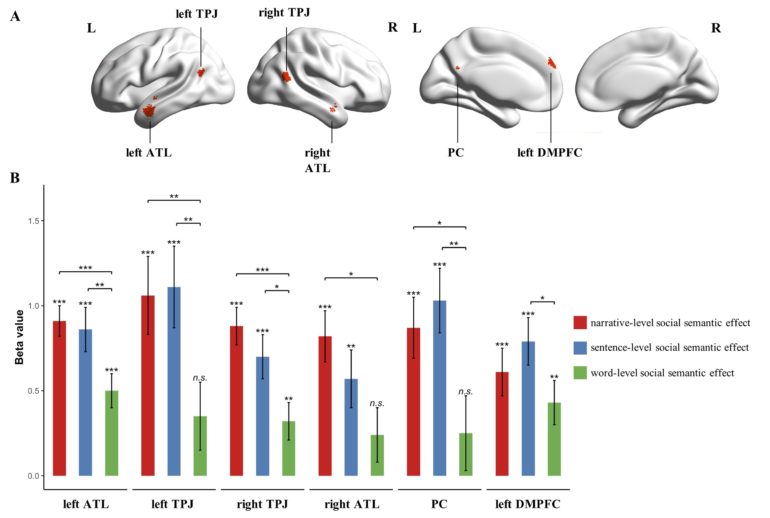 Past psychology studies have gathered evidence hinting at the existence of a brain network that processes the social meaning of individual words. Recently, some scientists have hypothesized that the same network also allows humans to evaluate the social meaning conveyed by longer texts, such as sentences or paragraphs.

Researchers at CAS Key Laboratory of Behavioral Science in China and University of Trento in Italy have recently carried out a study aimed at testing this hypothesis. Their findings, outlined in a paper published in the OXFORD Academic Social Cognitive and Affective Neuroscience journal, provides evidence suggesting that the same social semantic network identified in previous studies also supports the accumulation of connected social meanings.

“Our paper was mainly based on two lines of works, the first of which showed that a specific brain network represents the social meanings of words,” Nan Lin, Yangwen Xu and Guangyao Zhang, three of the researchers who carried out the study, told Medical Xpress via email. “For example, in a previous study, we found that thinking of high social-semantic-richness verbs (e.g. embrace and trust) evokes stronger activation than thinking of low social-semantic-richness verbs (e.g. walk and infer) does in this brain network.”

The recent study by Lin, Xu and Zhang also builds on previous findings suggesting that most brain areas within this hypothetical ‘social semantic network’ are more sensitive to sentence-level and discourse-level meanings than word-level meanings. In other words, these brain areas were found to be more active when people were processing sentences or discourses than lists of words. Moreover, these activation patterns appeared to gradually change when a person is trying to understand language, over a time that coincides with the time required to read specific sentences or paragraphs.

Interestingly, the researchers found that the brain areas involved in semantic processing were more active when people read narrative texts than when they read lists of words. Moreover, they observed that their activation could be better represented by considering how much entire texts had a social meaning than by how much individual words in a text did. Overall, these findings support the hypothesis that the social semantic brain network is not only involved in representing individual, socially relevant words, but that it also supports the accumulation of social meanings in a longer text.

Overall, the findings gathered by this team of researchers suggest that semantic accumulation is supported by a series of regions in different parts of the brain. Interestingly, these areas appear to be the same as those involved in processing the social meaning of individual words.

These findings offer new valuable insight on how humans process words and texts related to social interactions. In the future, they could inform further studies focusing on the same brain network and examining its activation patterns.

This is your brain on sentences