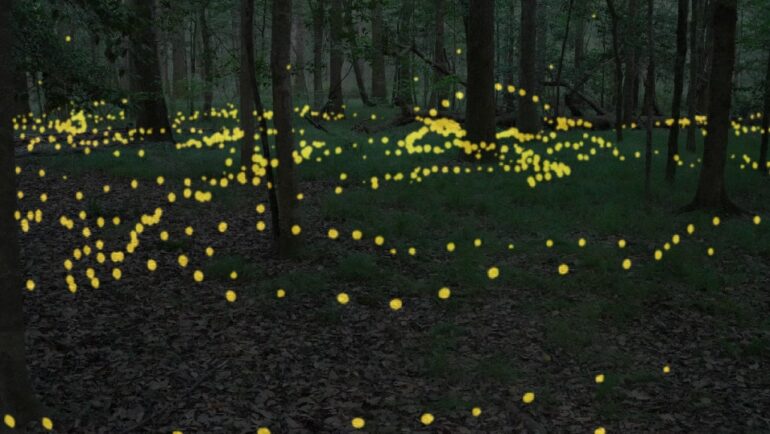 Imagine an old-growth forest in the fading light of a summer evening. As the last of the sun’s rays disappear beneath the horizon, a tiny flash catches your eye.

You turn around, hold your breath; it blinks again, hovering 2 feet above the leaf litter. Across the dusky glade, a fleeting response. Then another one, and another, and within minutes flickering fireflies spread all over the quiet woods.

At first they seem disorganized. But soon a few coordinated pairs appear, little tandems flashing on the same tempo twice a second. Pairs coalesce into triads, quintuplets, and suddenly the entire forest is pulsating with a common, glittering beat. The swarm has reached synchrony.

Firefly congregations are sprawling speed-dating events. Flashes convey a courtship dialogue between advertising males and selective females. Shaped by the interplay of competition and cooperation among thousands of fireflies in interaction, collective light patterns emerge, twinkling analogs to the murmurations of bird flocks swooping together. The mystifying phenomenon of some fireflies’ flash synchronization has puzzled scientists for over a century.

Synchrony is ubiquitous throughout the universe, from electron clouds to biological cycles and planetary orbits. But synchrony is a complex concept with many ramifications. It encompasses various shapes and forms, usually revealed by mathematics and later explored in nature.

Take the firefly swarm. Wait a little longer and among the illuminated chorus, something else appears: Some discordant flashers secede and continue off-beat. They blink at the same pace but keep a resolute delay with their conformist peers. Could this be evidence of a phenomenon predicted by mathematical equations but never seen in nature before?

Synchrony, with a twist

Twenty years ago, while digging deeper into the equations that form the framework of synchrony, physicists Dorjsuren Battogtokh and Yoshiki Kuramoto noticed something peculiar. Under specific circumstances, their mathematical solutions would describe an ambivalent ensemble, showing widespread synchrony interspersed with some erratic, free-floating constituents.

In Apps and WebCompaniesSmartphones
on 14 January 20213 min read

Their model relied on a collection of abstract clocks, called oscillators, that have a tendency to align with their neighbors. The nonuniform state was surprising, because the equations assumed all oscillators were perfectly identical and similarly connected to others.

Spontaneous breaking of underlying symmetry is something that typically bothers physicists. We cherish the idea that some order in the fabric of a system should translate into similar order in its large-scale dynamics. If oscillators are indistinguishable, they should either all get in sync, or all remain chaotic – not show differentiated behaviors.

It piqued the curiosity of many, including…