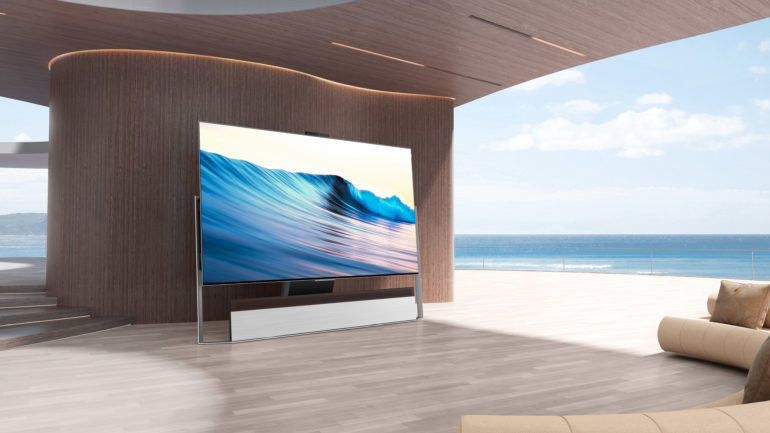 Chinese manufacturer TCL impressed us greatly with its flagship X925 8K Mini LED TV in our in-depth review earlier this month, with our reviewer describing it as a “belter of a TV” that excels “in both technology and performance terms”.

Now, TCL is attempting to improve upon what was already great with a new ‘Pro’ version of the television that sports a few extra bells and whistles, along with an eye-watering price.

Set for Australian release in late 2021/early 2022, the TCL X925 Pro carries all the features of the standard version, including a cutting-edge 8K panel with Mini LED backlighting system, Quantum Dot colour and a built-in soundbar that boasts Onkyo audio – all running on the new Google TV platform.

What sets the TCL X925 Pro apart, however, is its bonus inclusions, most of which are visible at a glance. For starters, the TCL X925 Pro sports a rather unusual rectangular metal stand with a box platform under its soundbar that may prove to be a divisive design choice.

It also boasts a fine microfibre vegan-leather covering over its soundbar’s face, along with a rather slick pop-up camera with 1080p resolution that can be used for video conferencing.

The camera also allows for gesture controls, which means you can “fast forward, rewind, pause, play, or take selfies while watching content with a simple hand signal,” according to TCL’s announcement.

Given that the standard TCL X925 is available from AU$4,499 for the 65-inch model and AU$5,999 for the 75-inch model, you’re going to really, really want those additional ‘Pro’ features to justify dropping all that extra cash.

While it’s true that the standard version doesn’t come in an 85-inch option, paying an extra AU$9,000 for 10 more inches of screen seems like a rather impulsive choice to make.

Likewise, we’re not entirely sure that the TCL X925 Pro 8K Mini LED Google TV’s vegan leather soundbar covering and pop-up camera are enough to convince people to go for the Pro model. We also imagine that its strange rectangular stand and box design will turn off as many people as it attracts.

That said, we’re confident the TCL X925 Pro 8K Mini LED Google TV will find its niche when it arrives on Australian shores late this year or early next year.