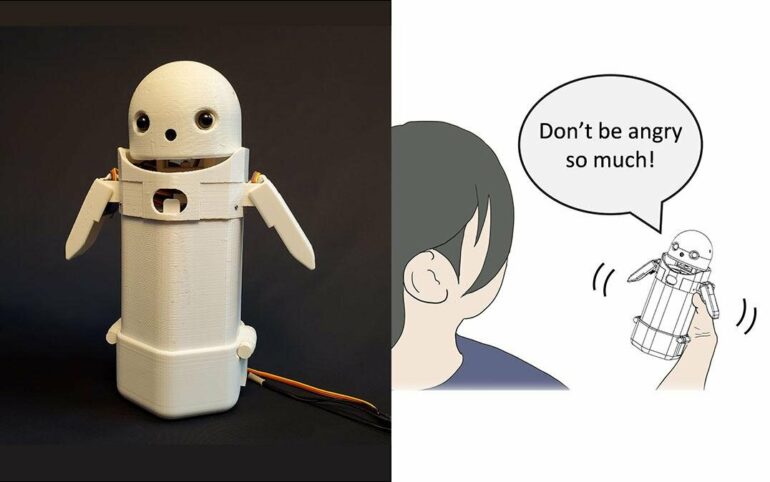 Scientists from the Faculty of Engineering, Information and Systems at the University of Tsukuba devised a text message mediation robot that can help users control their anger when receiving upsetting news. This device may help improve social interactions as we move towards a world with increasingly digital communications.

While a quick text message apology is a fast and easy way for friends to let us know they are going to be late for a planned meet up, it is often missing the human element that would accompany an explanation face-to-face, or even over the phone. It is likely to be more upsetting when we are not able to perceive the emotional weight behind our friends’ regret at making us wait.

Now, researchers at the University of Tsukuba have built a handheld robot they called OMOY, which was equipped with a movable weight actuated by mechanical components inside its body. By shifting the internal weight, the robot could express simulated emotions. The robot was deployed as a mediator for reading text messages. A text with unwelcome or frustrating news could be followed by an exhortation by OMOY to not get upset, or even sympathy for the user.

“With the medium of written digital communication, the lack of social feedback redirects focus from the sender and onto the content of the message itself,” author Professor Fumihide Tanaka says. The mediator robot was designed so that it can suppress the user’s anger and other negative interpersonal motivations, such as thoughts of revenge, and instead foster forgiveness.

The researchers tested 94 people with a message like “I’m sorry, I am late. The appointment slipped my mind. Can you wait another hour?” The team found that OMOY was able to reduce negative emotions. “The mediator robot can relay a frustrating message followed by giving its own opinion. When this speech is accompanied by the appropriate weight shifts, we saw that that the user would perceive the ‘intention’ of the robot to help them calm down,” Professor Tanaka says.

The robot’s body expression produced by weight shifts did not require any specific external components, such as arms or legs, which implied that the internal weight movements could reduce a user’s anger or other negative emotions without the use of rich body gestures or facial expressions.

In AISmartphones
on 2 November 20203 min read