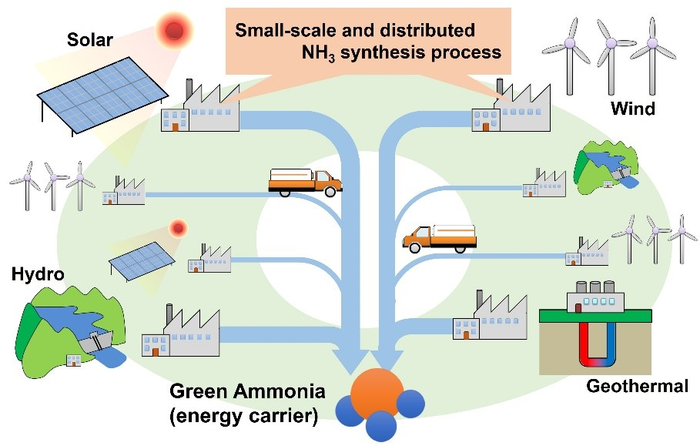 Research by Japanese scientists at Hiroshima University reveals a way to make ammonia from its constituent molecules of nitrogen and hydrogen at ambient pressure.

The new study, published on Feb. 2 in the Journal of Physical Chemistry C, demonstrates a process with potential for use in renewable energy storage and transfer, which relies on a dispersed and fluctuating network of resources, such as sun and wind. “The ultimate goal of this work is to establish the small-scale NH3 production process to effectively utilize renewable energy” said study author and associate professor Hiroki Miyaoka from Hiroshima University’s Natural Science Center for Basic Research and Development.

Ammonia (NH3) has recently been recognized as an outstanding energy carrier molecule. In 1918, German chemist Fritz Haber won the Nobel Prize for synthesis of ammonia from its elements, paving the way for ammonia’s significant role in industrial fertilizers. However, use of ammonia in renewable energy applications has been limited by the processes available to synthesize it. The Haber-Bosch process, used in industrial production of ammonia, requires high temperature and pressure, conditions not typically available in renewable energy storage and transport infrastructure.

The NH3 synthesis process via chemical looping using lithium hydride (LiH) starts by combining LiH with N2 (molecular nitrogen) at ambient pressure and temperatures up to 500°C to yield a lithium imide product (LiNH2). The lithium imide then reacts with hydrogen gas (H2) to yield ammonia. The reaction time for ammonia synthesis from its constituent molecules in this process is more than 1000 minutes. Its speed is limited by the clumping up (agglomeration) of the products of the reaction into large particles (more than 200 μm) that don’t have much surface area exposed to the hydrogen gas. For its practical application in distributed renewable energy, this prolonged reaction, requiring extreme conditions, is an impediment to ammonia production.

In the new study, researchers experimented with using lithium oxide (Li2O) as a molecular scaffold to synthesize ammonia under ambient pressure and temperatures below 400°C, conditions easy to mimic in nonindustrial settings. They combined the reactant lithium hydride with lithium oxide and found that the lithium hydride prevented clumping, leaving smaller particles (less than 50 μm) with more surface area exposed for chemical reactions. Using these non-agglomerated reactants and adding the gaseous hydrogen used in the final step of ammonia synthesis, they were able to produce ammonia more quickly; the reaction substantially sped up.

If ammonia can be produced quickly with relatively simple equipment under modest temperature and pressure conditions, it paves the way for smaller-scale ammonia production.

“The chemical looping process is useful to establish the small-scale NH3 synthesis process, which can be operated under lower pressure and temperature with higher conversion yield than the conventional catalytic process,” said Miyaoka. The new process also obviates the need for expensive metal catalysts, such as elemental ruthenium (Ru), used in industrial synthesis of ammonia.

The results of this study are relevant to renewable energy generation, which tends to be more distributed than industrial production. The process pioneered in the Hiroshima lab to produce ammonia efficiently under near-ambient conditions is the foundation for such applications.

“As a next step, the practical reaction processes to effectively control the above NH3 synthesis should be considered from chemical engineering points of view,” Miyaoka said.