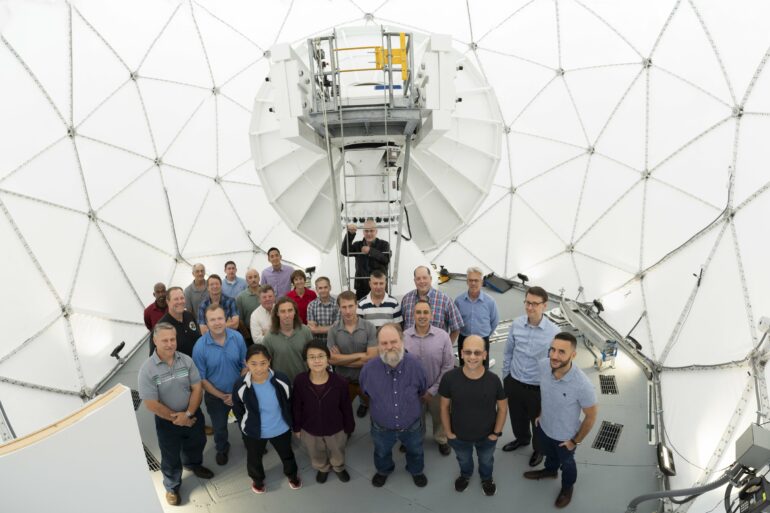 On the rooftop of an MIT Lincoln Laboratory building sits a 38-foot-wide dome-shaped radio antenna enclosure, or radome. Inside the climate-controlled environment, shielded from the New England weather, a steel structure supports a 20,000-pound, 20-foot diameter satellite communications (SATCOM) antenna. The antenna—called the Multi-Band Test Terminal (MBTT)—can rotate 15 degrees per second, completing a single revolution in 24 seconds. At this speed, the MBTT can detect and track satellites in medium and low Earth orbit (medium and low refer to the altitude at which the satellites orbit the Earth).

Prior to the installation of the MBTT in 2017, the laboratory relied on a variety of smaller antennas for SATCOM testing, including the Over-the-Air Ka-band Test Terminal, or OTAKaTT. Compared to the nearly eight-foot diameter OTAKaTT antenna, the MBTT is seven times more sensitive. And unlike its predecessor, the MBTT, as its name suggests, is designed to be easily reconfigured to support multiple radio frequency (RF) bands used for military and commercial satellite SATCOM systems.

“As a much larger, more powerful, and more flexible test asset than OTAKaTT, the MBTT is a game-changer for enabling the development of advanced SATCOM technology,” says Brian Wolf, a technical staff member in Lincoln Laboratory’s Advanced Satcom Systems and Operations Group.

Wolf was involved in the installation and initial commissioning of the MBTT in 2017. He then led the MBTT through a rigorous certification process with the U.S. Army Space and Missile Defense Command, completed in 2019, demonstrating that the transmit and receive performance of the antenna was sufficient for it to operate on the Wideband Global SATCOM (WGS) system. A constellation of 10 satellites owned and operated by the U.S. Department of Defense, WGS provides high-data-rate connectivity between various points on Earth. Since 2019, Wolf has served as principal investigator on a project that owns the MBTT, supporting the development of the U.S. Space Force’s Protected Anti-Jam Tactical SATCOM (PATS) capabilities.

“PATS is developing the capability to deliver protected tactical waveform, or PTW, services over WGS, as well as over commercial transponder satellites and new DoD satellites with dedicated onboard PTW processing,” says Wolf.

As Wolf explains, a waveform is the signal transmitted between two modems when they are communicating, and PTW is a special kind of waveform designed to provide highly secure, jamming-resistant communications. Jamming refers to when communication signals are interfered with—either accidentally by friendly forces (who, for example, may have misconfigured their SATCOM equipment and are transmitting at the wrong frequency) or intentionally by adversaries seeking to prevent communications. Lincoln Laboratory started developing PTW in 2011, contributing to the initial design and system architecture. In the years since, the laboratory has participated in prototyping and testing efforts to help industry mature modems for processing the waveform.

“Our prototype PTW modems have been fielded to industry sites all over the country so vendors can test against them as they develop PTW systems that will be deployed in the real world,” says Wolf. The initial operating capability for PTW services over WGS is anticipated for 2024.

Staff originally conceived the MBTT as a test asset for PTW. Directly underneath the MBTT is a PTW development lab, where researchers can run connections directly to the antenna to perform PTW testing.

One of the design goals for PTW is the flexibility to operate on a wide range of RF bands relevant to satellite communications. That means researchers need a way to test PTW on these bands. The MBTT was designed to support four commonly used bands for SATCOM that span frequencies from 7 GHz to 46 GHz: X, Ku, Ka, and Q. However, the MBTT can be adapted in the future to support other bands through the design of additional antenna feeds, the equipment connecting the antenna to the RF transmitter and receiver.

To switch between the different supported RF bands, the MBTT must be reconfigured with a new antenna feed, which emits signals onto and collects signals from the antenna dish, and RF processing components. When not in use, antenna feeds and other RF components are stored in the MBTT command center, located underneath the main platform of the antenna. The feeds come in a range of sizes, with the largest registering six feet in length and weighing nearly 200 pounds.

To swap out one feed for another, a crane inside the radome is used to lift up, unbolt, and remove the old feed; a second crane then lifts the new feed up into place. Not only does the feed on the front of the antenna need to be replaced, but all of the RF processing components on the back of the antenna—such as the high-power amplifier for boosting satellite signals and the downconverter for converting RF signals to a lower frequency more suitable for digital processing—also need to be replaced. A team of skilled technicians can complete this process in four to six hours. Before scientists can run any tests, the technicians must calibrate the new feed to ensure it is operating properly. Typically, they point the antenna onto a satellite known to broadcast at a specific frequency and collect receive measurements, and point the antenna straight up into free space to collect transmission measurements.

Since its installation, the MBTT has supported a wide range of tests and experiments involving PTW. During the Protected Tactical Service Field Demonstration, a PTW modem prototyping effort from 2015 to 2020, the laboratory conducted tests over several satellites, including the EchoStar 9 commercial satellite (which offers broadband SATCOM services, including satellite TV, across the country) and DoD-operated WGS satellites. In 2021, the laboratory used its PTW modem prototype as the terminal modem to conduct an over-the-air test of the Protected Tactical Enterprise Service—a ground-based PTW processing platform Boeing is developing under the PATS program—with the Inmarsat-5 satellite. The laboratory again used Inmarsat-5 to test a prototype enterprise management and control system for enabling resilient, uninterrupted SATCOM. In these tests, the PTW modem prototype, flying onboard a 737 aircraft, communicated through Inmarsat-5 back to the MBTT.

“Inmarsat-5 provides a military Ka-band transponded service suitable for PTW, as well as a commercial Ka-band service called Global Xpress,” explains Wolf. “Through the flight tests, we were able to demonstrate resilient end-to-end network connections across multiple SATCOM paths, including PTW on military Ka-band and a commercial SATCOM service. This way, if one satellite communications link is not working well—maybe it’s congested with too many users and bandwidth isn’t sufficient, or someone is trying to interfere with it—you can switch to the backup secondary link.”

In another 2021 demonstration, the laboratory employed the MBTT as a source of modeled interference to test PTW over O3b, a medium-Earth-orbit satellite constellation owned by the company SES. As Wolf explains, SES provided much of their own terminal antenna equipment, so, in this case, the MBTT was helpful as a test instrument to simulate various types of interference. These interferences ranged from misconfigured users transmitting at the wrong frequencies to simulation of advanced jamming strategies that may be deployed by other nation states.

The MBTT is also supporting international outreach efforts led by Space Systems Command, part of the U.S. Space Force, to extend the PATS capability to international partners. In 2020, the laboratory used the MBTT to demonstrate PTW at X-band over SkyNet 5C, a military communications satellite providing services to the British Armed Forces and coalition North Atlantic Treaty Organization forces.

“Our role comes in when an international partner says, “PTW is great, but will it work on my satellite or on my terminal antenna?'” explains Wolf. “The SkyNet test was our first using PTW over X-band.”

Westworld season 4: release date, cast, and everything else we know

In AIApps and WebSmartphones
on 16 June 20214 min read

Connected via fiber-optic links to research facilities across Lincoln Laboratory, the MBTT has also supported non-PTW testing. Staff have tested new signal processing technology to suppress or remove interference from jammers, new techniques for signal detection and geolocation, and new ways of connecting PTW users to other Department of Defense systems.

In the years ahead, the laboratory looks forward to performing more testing with more user communities in the Department of Defense. As PTW reaches operational maturity, the MBTT, as a reference terminal, could support testing of vendors’ systems. And as PTS satellites with onboard PTW processing reach orbit, the MBTT could contribute to early on-orbit checkout, measurement, and characterization.

“It’s an exciting time to be involved in this effort, as vendors are developing real SATCOM systems based on the concepts, prototypes, and architectures we’ve developed,” says Wolf.