Artificial intelligence is here in our entertainment. What does that mean for the future of the arts? 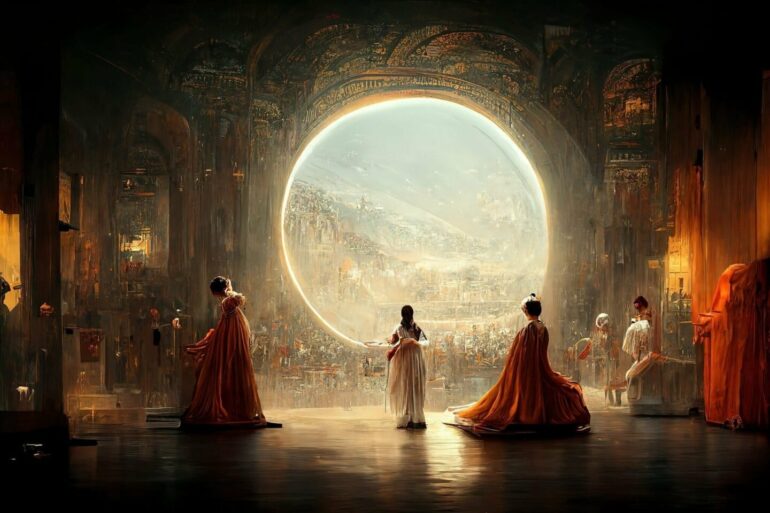 Last week’s Colorado State Fair was the first time Jason Allen had ever competed in an arts competition. So, it was a surprise to the 39-year-old fantasy tabletop game creator that his creation, “Théâtre D’opéra Spatial,” won a first-place blue ribbon in the “digital art/digitally manipulated photography” category.

What surprised even more people than just Allen was that he had created his work––a rendering of three lushly robed figures staring through a gleaming portal into another world––with the artificial intelligence tool Midjourney. For Allen, the win was an unexpected triumph, but for others it was the fuse that sparked a heated debate over AI’s potential uses––and misuses––in the arts.

Midjourney, DALL-E and other text-to-image tools are just one way that AI has been making its way into the creative process. Look no further than the brief—but controversial—existence of AI rapper FN Meka or a deepfake company’s appearance on “America’s Got Talent.”

Is AI a new piece of technology that will create the next big artistic movement? Or does it herald the destruction of the artist? It turns out the answer is not so simple.

“It is important to be mindful about the implications of automation and what it means for humans who might be ‘replaced,'” says Cansu Canca, a research associate professor at Northeastern, and founder and director of the AI Ethics Lab. “But this does not necessarily require being fearful of becoming obsolete. Instead, the question we should ask is what do we want from machines and how can we best use them to the benefit of humans.”

The concerns around AI’s perceived incursion into art go beyond claims of digital plagiarism that were lobbed at Allen. With the push of a button, he was able to create a piece of art that would have taken hours to create by hand.

“We’re watching the death of artistry unfold right before our eyes—if creative jobs aren’t safe from machines, then even high skilled jobs are in danger of becoming obsolete,” posted one Twitter user. “What will we have then?”

Derek Curry, an associate professor of art and design at Northeastern, isn’t convinced AI art will ever replace the creative work of humans. By its very nature, the technology has its limits.

“It can’t produce anything that it hasn’t already been trained on, so it’s impossible for it to create legitimately new things,” Curry says.

This is far from the first time new technology has sparked controversy in the arts community.

“A lot of the hype is very similar to what happened around the late 19th century with photography,” says Curry, a trained photographer.

Similar to photography, Curry says humans play much more of a role in creating AI-generated art than most people assume.

The cycle of fear and acceptance has occurred with every new technology since the dawn of the industrial age, and there are always casualties that come with change.

“There are real ways in which an activity that was done in one way by a human can now be done in a different way, requiring fewer humans to do that job than previously,” Deirdre Loughridge, an associate professor of music at Northeastern, says.

If AI-generated and AI-assisted art becomes more commonly accepted, artists will have to radically rethink how they do their work, spend their time and structure their creative process, Loughridge says.

But she also argues there is a general lack of technological literacy around AI that leads to misperceptions about what it can do for artists. In music, artificial intelligence has been used for timbre or tone transfer, allowing singers to use their voices as synthesizers by singing into software that transforms the tone into the sound of a different instrument.

Like any other piece of technology, the way AI is used changes when it gets into the hands of artists—not the other way around. Loughridge compares it to Auto-Tune, a pitch correction processor that was once controversial but has become a music industry standard.

“It’s a tool that was meant to do this invisible pitch correction, but people turn it all the way to the zero setting, which was never supposed to be done, and it creates this distinctive sound and then multiple distinctive sounds,” Loughridge says. “Something like that I could definitely see [with AI].”

For Jennifer Gradecki, a Northeastern associate professor of art and design, AI also has potential as a creative aide—in part because of what it can’t do. According to Gradecki, artificial intelligence can help find the most generic answers to artistic dilemmas, which points her down more creative paths.

“We were trying to come up with a collective name using AI and it was funny what some of the combinations it would come up with were, but nothing was good,” Gradecki says. “Nothing was as creative as what we would be able to generate.”

In order to bridge what they see as a gap in technological literacy when it comes to AI, Gradecki and Curry worked together to develop a creative computing minor at Northeastern. The aim is to provide students with a critical and creative understanding of how artificial intelligence can be used. The first course, introduction to creative computing, began this fall, and there are plans to hold another intro course in the spring.

In focusing on the potential, as well as the limits, Gradecki and Curry hope to show students that AI is no different than any other artistic tool. Artists are always bound by the limits of their creativity and tools, whether they’re using a paint brush, camera or neural network. In that way, the future of the arts doesn’t belong to AI, as its worst critics fear—it still belongs to artists.

“I think this notion that AI could maybe replace creativity, to me it just really seems implausible that it could go that far,” Gradecki says. “Creativity is actually the one thing that isn’t going to be able to be automated.”


Citation:
Artificial intelligence is here in our entertainment. What does that mean for the future of the arts? (2022, September 12)