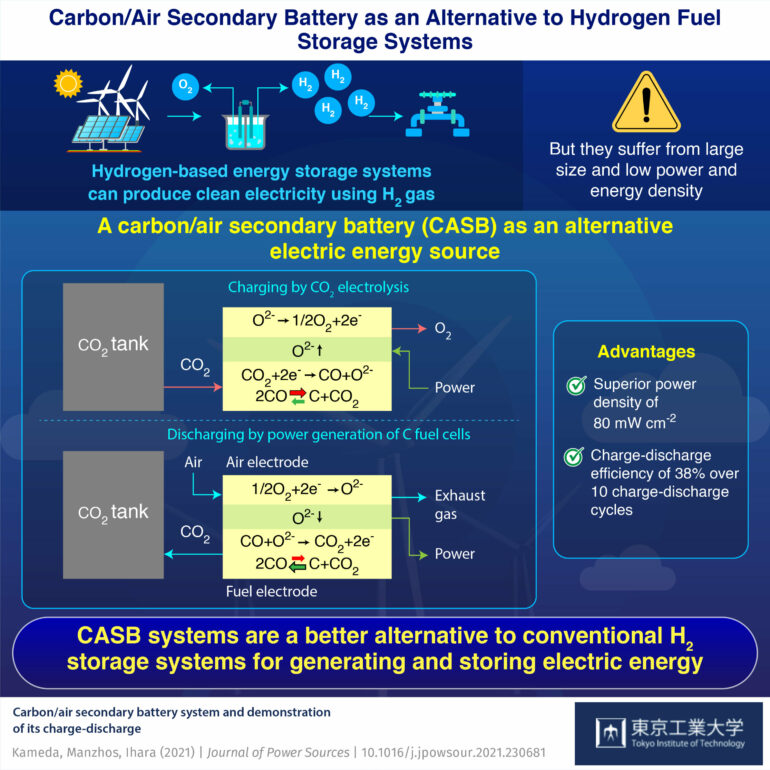 One of the barriers to generating electricity from wind and solar energy is their intermittent nature. A promising alternative to accommodate the fluctuations in power output during unfavorable environmental conditions are hydrogen storage systems, which use hydrogen produced from water splitting to generate clean electricity. However, these systems suffer from poor efficiency and often need to be large in size to compensate for it. This, in turn, makes for complex thermal management and a lowered energy and power density.

In a study published in Journal of Power Sources, researchers from Tokyo Tech have now proposed an alternative electric energy storage system that utilizes carbon (C) as an energy source instead of hydrogen. The new system, called a “carbon/air secondary battery (CASB),” consists of a solid-oxide fuel and electrolysis cell (SOFC/ECs) where carbon generated via electrolysis of carbon dioxide (CO2), is oxidized with air to produce energy. The SOFC/ECs can be supplied with compressed liquefied CO2 to make up the energy storage system.

“Similar to a battery, the CASB is charged using the energy generated by the renewable sources to reduce CO2 to C. During the subsequent discharge phase, the C is oxidized to generate energy,” explains Prof. Manabu Ihara from Tokyo Tech.

As the carbon is stored in a confined space in the SOFCs/ECs, the energy density of the CASB is limited by the amount of carbon it can hold. Despite this limitation, the researchers found that the CASB had a higher volumetric energy density compared to hydrogen storage systems.

Another indicator of battery performance is the charge-discharge efficiency. To evaluate this metric, the researchers performed a charge-discharge experiment. They observed that the transformations between C and CO2 were due to “Boudouard reactions” characterized by a redox reaction of a mixture of carbon monoxide (CO), CO2 and C. Specifically, during the charging phase, C was deposited on the electrode via the electrochemical reduction of CO2 and the reduction of CO via the Boudouard decomposition. During the discharge phase, the C was oxidized to CO and CO2 via the Boudouard gasification reaction and electrochemical oxidation respectively. The researchers found that the C utilization for energy generation of the CASB depended on the equilibrium between the 3 different carbon species (C, CO2, CO), also known as the “Boudouard equilibrium.”

The CASB system was able to use most of the carbon deposited on the electrode for energy generation, demonstrating a high Coulombic efficiency of 84 percent, indicating that most of the stored energy can be obtained during the discharge phase. Furthermore, it showed a superior power density of 80 mW/cm2 and a charge-discharge efficiency of 38 percent that was sustained over 10 charge-discharge cycles. This suggested that no degradation of the fuel electrode occurred.

“Compared to hydrogen storage systems, the CASB system is expected to have a smaller system size and higher system efficiency,” says Prof. Ihara. Their new system could lay the foundation for compact and efficient carbon energy storage systems that could work alongside renewable energy sources for a fossil-fuel-free future.

In Apps and WebCybersecuritySmartphones
on 1 November 20201 min read