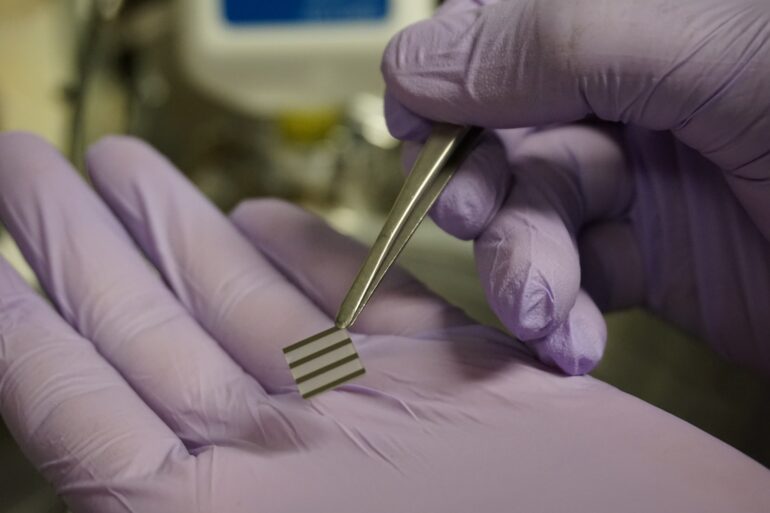 A unique material, nickel oxide demonstrates the ability to learn things about its environment in a way that emulates the most basic learning abilities of animals, as my colleagues and I describe in a new paper.

For over half a century, neuroscientists have studied sea slugs to understand basic animal learning. Two fundamental concepts of learning are habituation and sensitization. Habituation occurs when an organism’s response to a repeated stimulus continuously decreases. When researchers first touch a sea slug, its gills retract. But the more they touch the slug, the less it retracts its gills. Sensitization is an organism’s extreme reaction to a harmful or unexpected stimulus. If researchers then shock a sea slug, it will retract its gills much more dramatically than when it was merely touched. This is sensitization.

Nickel oxide has features that are strikingly similar to this learning behavior. Instead of gills retracting, we measured the change in electrical conductivity of the material. The stimulus, instead of a finger poke, was repeatedly alternating the environment of the nickel oxide between normal air and hydrogen gas.

Nickel oxide is interesting because when you expose it to hydrogen gas, its crystalline structure subtly changes and more electrons become available to generate an electrical current. In our experiment, we kept switching between the hydrogen-only and regular air environments. You would expect the electrical conductivity to oscillate up and down directly in relation to the exposure to hydrogen or air. But just as with the sea slugs, the change in conductivity of the nickel oxide slowly went down the more we stimulated it. It got habituated to the hydrogen.

When we exposed the material to bright light or ozone, though, it rapidly changed its conductivity – the same way a slug will always respond dramatically to a small shock.

The ability to learn, remember or forget information as needed is a powerful skill for any animal or machine. So far, the vast majority of research in the field of artificial intelligence has focused on software-based approaches to machine learning, with far less effort dedicated to studying the learning abilities of materials.

At the center of these two related areas of research lies the field of brain-inspired computers. For intelligence to be encoded into hardware, scientists need semiconductors that can learn from past experience and adapt to dynamic environments in a physical way similar to that of neurons in animal brains. Our new research showing…