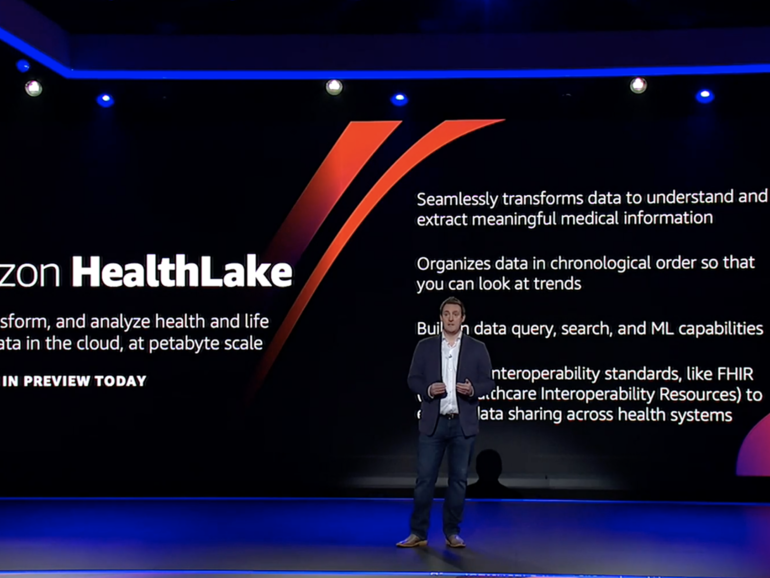 Among other applications, Wood talked at length about healthcare and life sciences. The work in that field, he said, is hampered by the way that data is spread throughout numerous repositories in different formats, requiring weeks or months to prepare, stage, transform data, he said.

To ameliorate all that, Wood unveiled a new AWS service, Amazon HealthLake, a way to “store, transform, and analyze health and life science data in the cloud at petabyte scale,” as the company puts it.

Wood gave an example of HealthLake used in detection of diabetes. For early diagnosis of diabetes, doctors have to go through hundreds of thousands of data points from donor notes and prescriptions and the rest.

“It is a Herculean effort” he said, to analyze all that data. “We can bring it all together in minutes,” said Wood. HealthLake can automatically load structured data but also extract information such as patient names from physician notes and added that to a data lake. “These are all just pieces of the puzzle scattered around different silos, but when combined, we can get a much clearer picture,” said Wood.

Wood brought on stage Elad Benjamin, the general manager of the radiology informatics business at medical device giant Philips. Benjamin noted the difficulty of the abundance of data in healthcare. “Physicians need to work through those silos, and it’s getting harder for them to diagnose and treat,” said Benjamin. He said Philips is using AWS services to free up scientists to pursue “higher-level activities.”