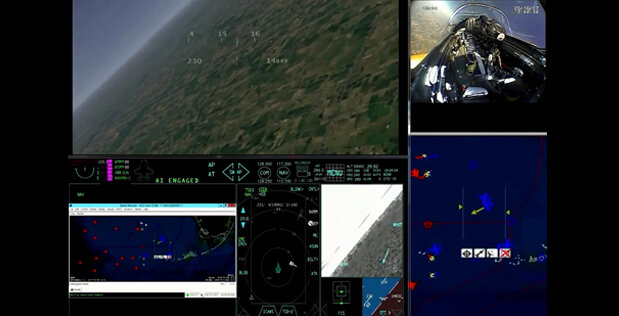 The Defense Advanced Research Projects Agency (DARPA) has revealed strides in its Air Combat Evolution (ACE) program. Midway through Phase 1, the program has accomplished several goals on the path toward live subscale aircraft dogfights in Phase 2 further into 2021.

Similar to the skirmish between canines, an aerial dogfight refers to two aircraft conducting combat at close range. The maneuvers involved in such interactions help prepare pilots for potential engagement with airborne enemies. Deemed the Collaborative Aircraft Autonomy program, this newest initiative aims to equip aircraft to fly autonomously with the assistance of AI.

So far, the program has succeeded in advanced virtual AI dogfights within (WVR) and beyond visual range (BVR) in scenarios involving multiple aircraft and updated simulated weapons; piloted flights of jets to assess pilot physiology and confidence in AI; and first adjustments to the initial, full-scale jet trainer scheduled to include an onboard AI “pilot”, come Phase 3 of the program.

For now, the program manager of DARPA’s Strategic Technology Office has stated that their next goal centers on preparing the AI algorithms to transition from simulated to real flight. Evidently, up until now, simulated-to-real flight adaptation has experienced challenges related to the AI algorithm’s excess dependence on digital components of the simulation environment.

Overall, the ACE program seeks to train these AI-controlled aircraft through human-computer interaction during flight simulation and in the real world. By using human-machine collaborative dogfighting, the mission remains to develop a scalable and trusted autonomy to help avoid risking the lives and safety of human pilots.

In fact, a recent simulation against an experience F-19 fighter pilot resulted in the AI aircraft out-maneuvering its human-piloted counterpart 5-0 during their dogfight. Moreover, during the latest all-AI interaction which featured two collaborative autonomous aircraft facing off against an “enemy” autonomous aircraft, the program added more weapons into the fight—a gun for precise, shorter-range shots and a missile for longer-range targets.

Such additional weapons as well as additional aircraft from opposing sides helps to train the AI algorithm to differentiate between friend and foe on the battlefront. This manner of discrimination could prevent fratricide by aiding a human pilot whose vision or judgment has been otherwise compromised during a fight, thus rendering them unable to recognize a friendly fighter.

Glancing ahead, ACE program to use the first autonomous, live-fly L-39 full-scale jet trainer during Phase 3 of the program in late 2023 and 2024.

Training AI to win a dogfight

Why does Microsoft keep trying to buy its way into the consumer market?