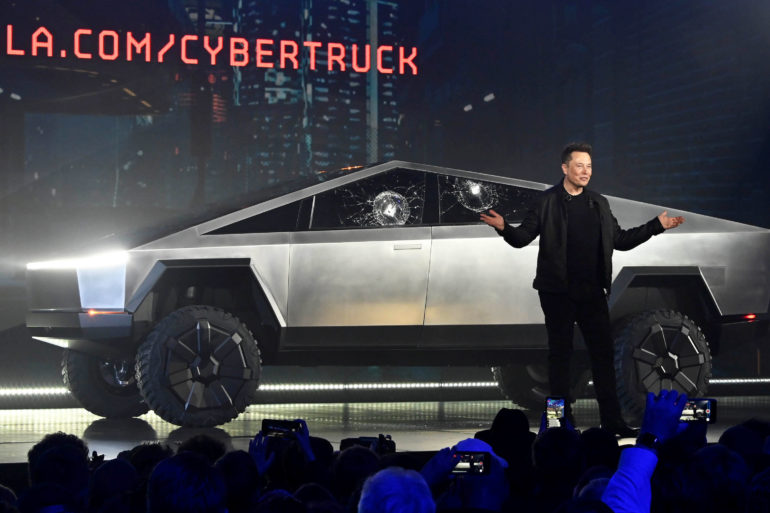 Tesla CEO Elon Musk said Thursday in an exchange with fans on Twitter that there’s “always some chance” his company’s forthcoming Cybertruck will “flop.” Nonetheless, Musk plans to keep the Cybertruck “production design” almost exactly the same as its show car — a giant metal trapezoid.

But he also said he “doesn’t care” about any risk that the Cybertruck could flop, because he personally loves its design.

He wrote, “To be frank, there is always some chance that Cybertruck will flop, because it is so unlike anything else. I don’t care. I love it so much even if others don’t. Other trucks look like copies of the same thing, but Cybertruck looks like it was made by aliens from the future.”

The Cybertruck’s 2019 launch event caused a stir due to the unusual design of the vehicle and because Musk asked Tesla design leader Franz von Holzhausen to try to smash the vehicle’s windows, which he did. Von Holzhausen threw a metal ball at one of the windows, surprising Musk when the glass shattered, though it stayed in place.

Despite the launch snafu and the uncertainty about when Tesla can start delivering the Cybertruck, the $100 orders poured forth. Musk boasted the company saw 250,000 within about a week of the Cybertruck’s debut.

In September at Tesla’s annual shareholder meeting and Battery Day event, Musk disclosed that Tesla had received so many Cybertruck orders that the company stopped counting. “The orders are gigantic,” he said, “… well over half a million orders. I think maybe six hundred thou— it’s a lot, basically. We stopped counting.”

That was before competitors showed off their plans for more traditional battery-powered trucks, such as the Ford F-150 Lightning and GMC Hummer EV.

Musk also said Thursday that Tesla doesn’t plan to put door handles on the Cybertruck, without specifying whether such a vehicle could meet Federal Motor Vehicle Safety Standards in the U.S. He also reminded fans that Tesla has decided to add a four-wheel steering system to the sizable Cybertruck, which should enable it to move diagonally in a straight line and get into or out of some tight spots.

He wrote, “In end, we kept production design almost exactly same as show car. Just some small tweaks here & there to make it slightly better. No door handles. Car recognizes you & opens door. Having all four wheels steer is amazing for nimble handling & tight turns!”

In CompaniesCybersecurity
on 18 February 20213 min read

The four-wheel steering feature, if it comes through as promised, would make the Cybertruck more directly competitive with the GMC Hummer EV, which already boasted a “crab mode” feature.

Musk did not comment on the Tesla Cyberquad, an ATV product that was meant to accompany the Cybertruck.

In the company’s first-quarter investor presentation, Tesla labeled the Cybertruck still “in development.” The company is expected to deliver a progress update and second-quarter results on July 26.