Microsoft to change how users can test Teams features 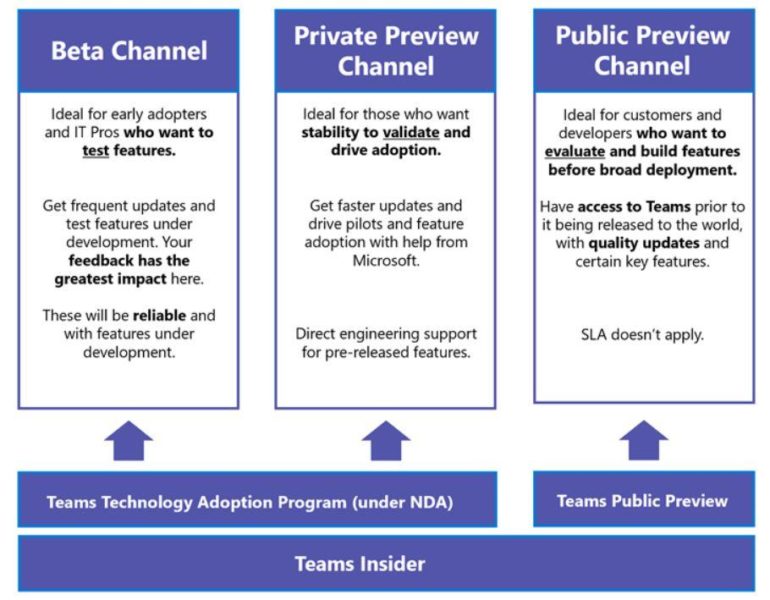 On December 8, Microsoft announced changes to how Teams users will be able to test coming features for the service. Microsoft is both changing the testing channel names and also adding a new Public Preview channel to its Teams testing program.

Teams users can pick one of three channels as part of the revamped Insider program. The three are Beta, Private Preview and Public Preview. Like the Windows and Office Insider program, these Teams testing channels are geared toward distinct groups. Beta is for early adopters and IT Pros who want to test features; Private Preview is for those who want more stability so they can validate; and Public Preview is for those who want to evaluate and build features before broad deployment.

Beta Channel was previously called “Ring 1.5” and is available to Team Technology Adoption Program (TAP) customers and only under non-disclosure agreements (NDAs). Private preview was called Ring 3 and also available to Teams TAP customers and only under NDA. Public Preview is the new channel and has no requirements and is opt-in, controlled by IT admins.

As Microsoft execs note, “One key difference between Teams and rest of Microsoft 365 is that Teams delivers feature rollout against build rollouts. This means (1) a feature can be enabled without a new build update, and (2) different channels may have the same build version at any point in time.”

Ditching LastPass? Here are some alternatives to try

Do these changes do anything to address users’ complaints that Microsoft is adding Teams features at such a break-neck pace that it’s hard to keep up? Not that I can see. In fact, there were dozens more new Teams features and changes announced (again) this week, including the decision to turn on Guest access in Teams by default for any customers who have not configured this setting starting on February 8, 2021.

In October, Microsoft officials said there are 115 million Teams daily active users. Today, Microsoft also said there are now more than 200 million monthly active SharePoint Online users — a figure which has doubled in the past year, no doubt in large part because of Teams and how/where Teams stores information.