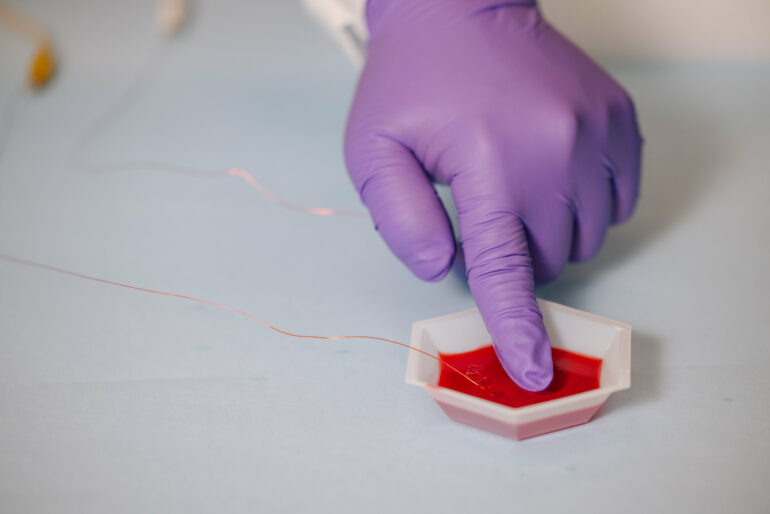 In the quest to build smart skin that mimics the sensing capabilities of natural skin, ionic skins have shown significant advantages. They’re made of flexible, biocompatible hydrogels that use ions to carry an electrical charge. In contrast to smart skins made of plastics and metals, the hydrogels have the softness of natural skin. This offers a more natural feel to the prosthetic arm or robot hand they are mounted on, and makes them comfortable to wear.

These hydrogels can generate voltages when touched, but scientists did not clearly understand how—until a team of researchers at UBC devised a unique experiment, published today in Science.

“How hydrogel sensors work is they produce voltages and currents in reaction to stimuli, such as pressure or touch—what we are calling a piezoionic effect. But we didn’t know exactly how these voltages are produced,” said the study’s lead author Yuta Dobashi, who started the work as part of his master’s in biomedical engineering at UBC.

Working under the supervision of UBC researcher Dr. John Madden, Dobashi devised hydrogel sensors containing salts with positive and negative ions of different sizes. He and collaborators in UBC’s physics and chemistry departments applied magnetic fields to track precisely how the ions moved when pressure was applied to the sensor.

“When pressure is applied to the gel, that pressure spreads out the ions in the liquid at different speeds, creating an electrical signal. Positive ions, which tend to be smaller, move faster than larger, negative ions. This results in an uneven ion distribution which creates an electric field, which is what makes a piezoionic sensor work.”

The researchers say this new knowledge confirms that hydrogels work in a similar way to how humans detect pressure, which is also through moving ions in response to pressure, inspiring potential new applications for ionic skins.

“The obvious application is creating sensors that interact directly with cells and the nervous system, since the voltages, currents and response times are like those across cell membranes,” says Dr. Madden, an electrical and computer engineering professor in UBC’s faculty of applied science. “When we connect our sensor to a nerve, it produces a signal in the nerve. The nerve, in turn, activates muscle contraction.”

“You can imagine a prosthetic arm covered in an ionic skin. The skin senses an object through touch or pressure, conveys that information through the nerves to the brain, and the brain then activates the motors required to lift or hold the object. With further development of the sensor skin and interfaces with nerves, this bionic interface is conceivable.”

Another application is a soft hydrogel sensor worn on the skin that can monitor a patient’s vital signs while being totally unobtrusive and generating its own power.

Dobashi, who’s currently completing his Ph.D. work at the University of Toronto, is keen to continue working on ionic technologies after he graduates.

“We can imagine a future where jelly-like ‘iontronics’ are used for body implants. Artificial joints can be implanted, without fear of rejection inside the human body. Ionic devices can be used as part of artificial knee cartilage, adding a smart sensing element. A piezoionic gel implant might release drugs based on how much pressure it senses, for example.”

Can Facebook’s smart glasses be smart about security and privacy?

Dr. Madden added that the market for smart skins is estimated at $4.5 billion in 2019 and it continues to grow. “Smart skins can be integrated into clothing or placed directly on the skin, and ionic skins are one of the technologies that can further that growth.”

The research includes contributions from UBC chemistry Ph.D. graduate Yael Petel and Carl Michal, UBC professor of physics, who used the interaction between strong magnetic fields and the nuclear spins of ions to track ion movements within the hydrogels. Cédric Plesse, Giao Nguyen and Frédéric Vidal at CY Cergy Paris University in France helped develop a new theory on how the charge and voltage are generated in the hydrogels.