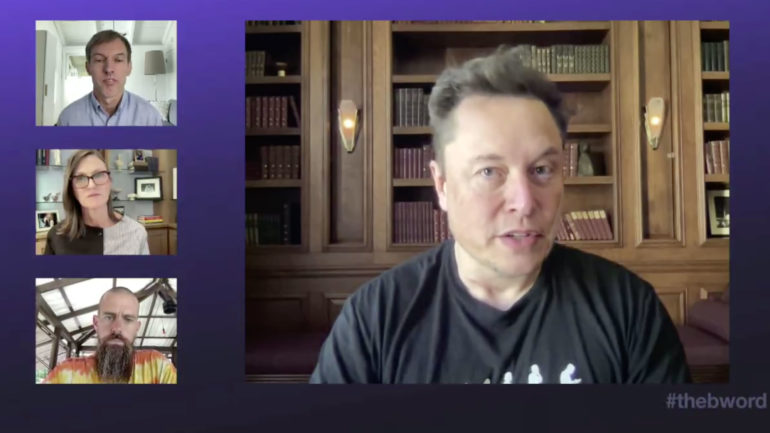 The price of ethereum rose Wednesday afternoon after Tesla and SpaceX CEO Elon Musk said he owns the cryptocurrency at The B-Word conference, an event hosted by the Crypto Council for Innovation.

Ethereum, which was already rallying on the day, touched its high of the session after Musk’s mention. It was last up more than 12% and near the highs of the day.

Musk also repeated his support for cryptocurrency in general, despite potential environmental risks, saying, “One thing you do need to watch out for with crypto, especially bitcoin, using proof of work, using energy that’s a bit too much and not necessarily good for the environment.”

Musk also said that at this time, the only publicly traded stock he owns is Tesla’s, and that he personally owns some bitcoin, dogecoin and ethereum. “The only significant thing I own outside of Tesla is SpaceX,” he noted, having helped create both companies.

He also said he has been holding his bitcoin long-term.

“If the price of bitcoin goes down I lose money. I might pump but I don’t dump,” Musk said. “I definitely do not believe in getting the price high and selling or anything like that. I would like to see bitcoin succeed.”

Musk also confirmed that both Tesla and SpaceX own bitcoin, and no other cryptocurrency at this time.

The B-Word conference was established to “demystify,” “de-stigmatize” and “correct the mainstream narrative” around the cryptocurrency bitcoin and promote its institutional acceptance and use.

Musk is speaking on a panel alongside Jack Dorsey, CEO of payment company Square and Musk’s favorite social media platform Twitter, along with ARK Invest CEO and founder Cathie Wood, who are answering questions from moderator and Square Crypto lead Steve Lee.